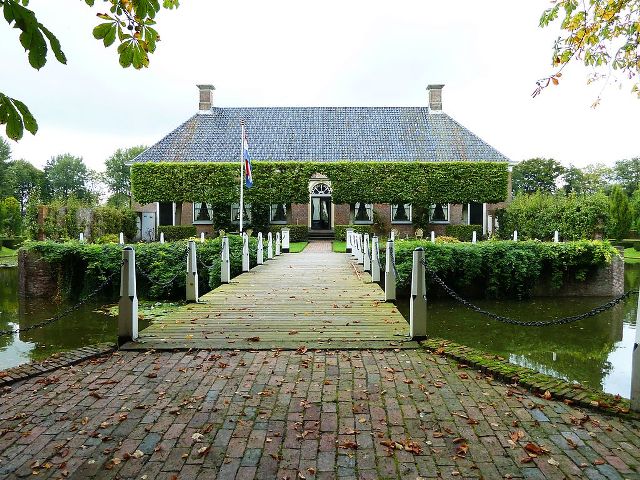 Location: Leens, Groningen, Netherlands.
Built: 14th-17th century.
Condition: In good condition.
Ownership / Access: Now a museum.
Notes: Verhildersum is a borg directly to the east of the town of Leens in the Dutch province of Groningen. It is now a museum.The borg dates, as a heerd (a word for farm in Gronings), from the 14th century. It became a borg in the 17th century. In 1398 a certain Aylko Ferhildema is mentioned, the same person as Aylko Onsta from Sauwerd. The surname Ferhildema could indicate that he (had) lived in Verhildersum. It is unknown whether, after Aylko Onsta, other members of the Onsta family lived in Verhildersum, but it is considered highly probable that the Onsta's kept possession of the borg for some time. One clue to this is that the borg was destroyed in both 1400 and 1514 by the city-Groningers (inhabitants of the city Groningen), just like the Onstaborg. However, in between these two battles no mention of the borg is made in official records. In a document mention is made of the reconstruction of the borg after 1514 for the sum of 1200 gold pieces, excluding some exterior buildings. After the death of the inhabitant Aepke Onsta in 1564, Ecke Claessen is mentioned as the inhabitant of the borg in 1576. Complaints by him are made with regard to troubles caused by billeted soldiers with their two wives and a child, who reside at the borg due to the Eighty Years' War. During the war Eylco Onsta flees to East Frisia, but despite this keeps calling himself hoofdeling of Wetsinge, Sauwerd and Verhildersum. However in reality, in 1587, twenty years after the death of Aepke Onsta, it is arranged in the property settlement that not he alone, but he and his sister Hidde Onsta together become owner of the borg Verhildersum. Verhildersum was then a heerd (farm) of 150 yokes (about 75 hectares) on which stood 'the old borg'.

How To Get To Verhildersum (Map):