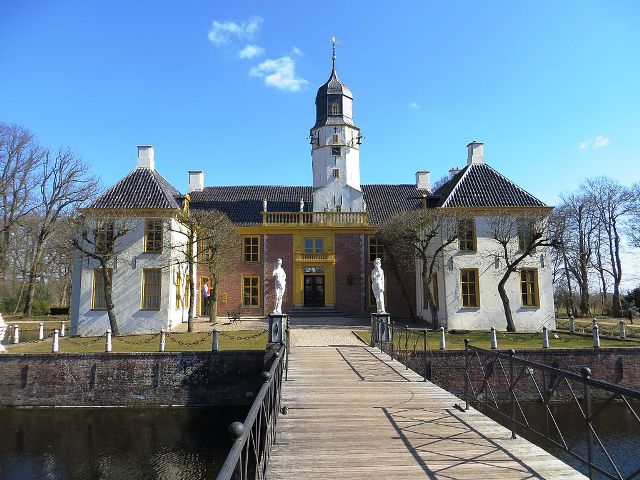 Location: Slochteren, Groningen, Netherlands.
Built: Middle Ages.
Condition: In good condition.
Ownership / Access: Now a historic house museum.
Notes: The Fraeylemaborg (Dutch pronunciation: [ˈfraːiləmaːˌbɔrx]) is a borg in the village of Slochteren in the Netherlands. At present the Fraeylemaborg is a historic house museum. The museum had 31,509 visitors in 2013. Fraeylemaborg is the most important of the borgen in the province of Groningen. These strong houses or keeps were built in the Middle Ages to store harvests and to protect their produce from robbers. Besides churches, these structures were the only buildings that used durable stone and masonry. In due time they grew to become centres of power and wealth. The Fraeylemaborg is located in the middle of the town of Slochteren which upon its discovery in 1959 gave its name to the largest gasfield in the world. In 1475 there was already a farm with the name Frealemaheerd. In the archives of 1504 the name is found of one Remmer Fraeylema. The building originates from the 16th century. The left wing was built in the 17th century. In 1680 the borg was sold by Evert Rengers, son of the former lord of the manor, because of his family debts. It was bought by Henric Piccardt (married to Anna Elizabeth Rengers, Evert's sister), who borrowed the necessary funds from Stadtholder William III. Piccardt extensively rebuilt the borg and he also landscaped a huge formal garden in the style of Louis XIV's France. After Piccardt's death the borg fell into disrepair. In 1781 the Fraeylemaborg was sold to Hendrik de Sandra Veldman. He rebuilt it into the shape it has today. Among his innovations was the removal of two towers which had graced the front square.

How To Get To Fraeylemaborg (Map):