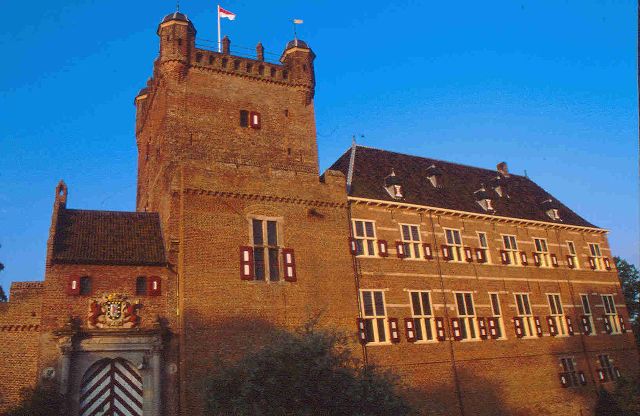 Location: 's-Heerenberg, the Netherlands.
Built: 1200.
Condition: In good condition.
Ownership / Access: --
Notes: Huis Bergh is a castle in 's-Heerenberg and is one of the largest castles in the Netherlands. It gives its name to the Land van den Bergh and was previously owned by the counts van Bergh. The building history dates back to the 13th century. The main parts of the castle are from the 14th, 15th and 17th century. In the beginning of the Dutch Revolt the house got damaged by war. In 1735 the castle burned down. In 1912 Huis Bergh and all belongings became the property of Jan Herman van Heek, an industrialist from Enschede. He restored the buildings. In 1939 there was another major fire. Thanks to the help of locals most of the furniture was rescued. Renovation began the same year and was completed in 1941. Huis Bergh contains a collection of early Italian paintings, one famous example of which is a panel from the Maestà of Duccio, which was added to the castle's collection in the 19th century. In addition to a portrait of Erasmus by Holbein Huis Bergh has an extraordinary collection of medieval handwritings.

How To Get To Huis Bergh (Map):