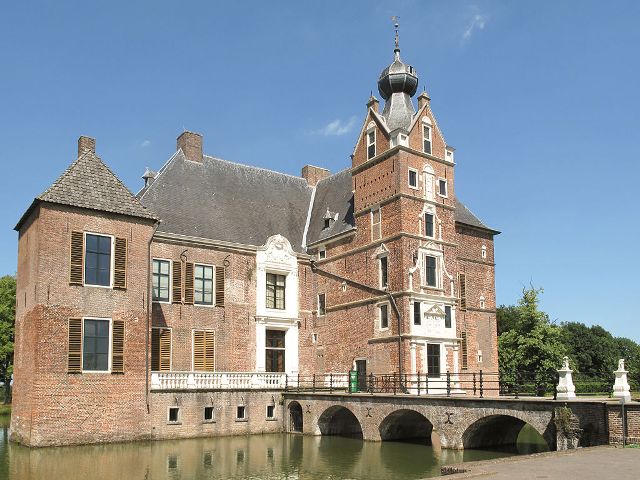 Location: Vaassen, Gelderland, Netherlands.
Built: 1543.
Condition: In good condition.
Ownership / Access: Foundation of Friends of Guelderian Castles.
Notes: Cannenburg Castle (Dutch: Kasteel De Cannenburgh) or Cannenburch Castle (Dutch: Cannenburch) is a watercastle in the Netherlands. It is situated in Vaassen, a town in the province of Gelderland. The Guelderian field marshal Maarten van Rossum built the watercastle in 1543 on the ruins of an old castle. After his death it was inherited by his nephew Hendrik van Isendoorn, who also supervised the final completion. The castle remained for over 300 years in the family D'Isendoorn à Blois. After the last van Isendoorn widow had died childless in 1881 the threat of the closure of the castle was a probability. In 1882 however it was bought by Eduard Baron van Lynden. 1905 it came into the possession of Mrs. Frida Cleve-Mollard from Berlin whose husband Richard Cleve was the last private inhabitant of the castle. After the Second World War the castle was confiscated by the Dutch government and in 1951 transferred to the "Foundation of Friends of Guelderian Castles" (Stichting Vrienden der Geldersche Kasteelen) for the symbolic price of one Dutch guilder. Between 1975 and 1981 a restoration of the castle took place, the antique furniture has been completed and it has since reopened to visitors.

How To Get To Cannenburg Castle (Map):