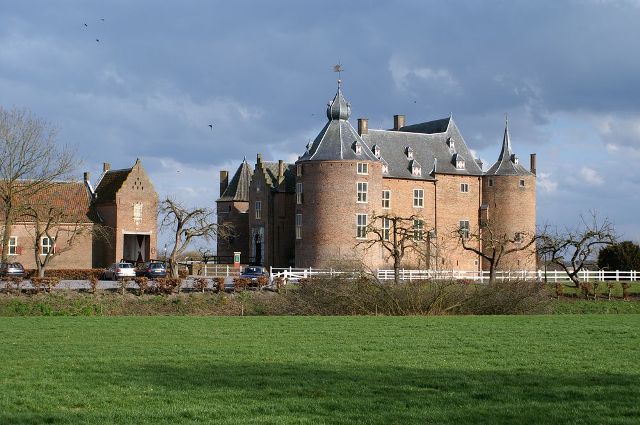 Location: Ammerzoden, Gelderland, Netherlands.
Built: 1350s.
Condition: In good condition.
Ownership / Access: Friends of Gelderland Castles Foundation, open to the public for tours and other functions.
Notes: Ammersoyen Castle (Dutch: Kasteel Ammersoyen) is located in Ammerzoden in the Bommelerwaard region in the province of Gelderland, the Netherlands. When the original construction of the Castle occurred is unclear, some sources claim it was as early as the 12th century. However, the consensus among historians is that the Van Herlaer family completed the Castle in the 1350s. At the time of its construction, the castle was built along a branch of the River Maas. Just a few years after the construction of the castle was completed, the river was rerouted leaving the castle to be surrounded by a moat. The last of the families to own the Castle was the Woelmont family, in the mid 19th century. The last Lord of Ammersoyen was Arthuer de Woelmont, who bought the Castle in 1856. Over the course of the next 17 years, he eventually sold all of the possessions of the Castle and in 1873 he sold the Castle to the Roman Catholic Church in Ammerzoden. By 1876, the Castle was transformed into a Convent for use by the Poor Clares. The Castle thus became the second Clarisse Convent in the Netherlands. The nuns made significant changes to the grounds when they lived in the Castle. The moat was filled-in and a chapel was built on the grounds, which is still there today. The start of World War II led to the end to the Convent as the area was bombed heavily. Much of the Castle and grounds were destroyed during the Allied bombings of WWII. The Castle allowed the people of the town a place to seek shelter during the War, although by the end of the War, not much of the Castle was left standing. After the war, a local businessman used the Castle as a factory that produced washing machines. In 1957, the Friends of Gelderland Castles Foundation bought the Castle and made extensive repairs. Over the course of the next 16 years, they were able to restore the Castle to its original medieval construction. This meant undoing many of the structural changes that have taken place over the centuries. While this sounds like a very difficult job, many of the changes that had taken place were actually just covered up by plaster and bricks. So recovering the original layout was actually not that taxing. They have restored the rooms to their original size and height, reconstructed chimneys, and moved staircases. The foundation was able to recover numerous artifacts from throughout the Castles history by digging up the filled in moat. Among the pieces found were fragments of pottery, stoneware, glass, silver, bronze, and tin. These artifacts are now on display in the Castles attic. The Castle and grounds were fully restored by 1976, and today it is open to the public for tours and other functions. From 1976 until 1999 the castle was used not only as a tourist attraction, but also as an official town hall and meeting place for the local municipality. After the Ammerzoden municipality ceased to exist in 1999, the meetings were moved from the castle.

How To Get To Ammersoyen Castle (Map):