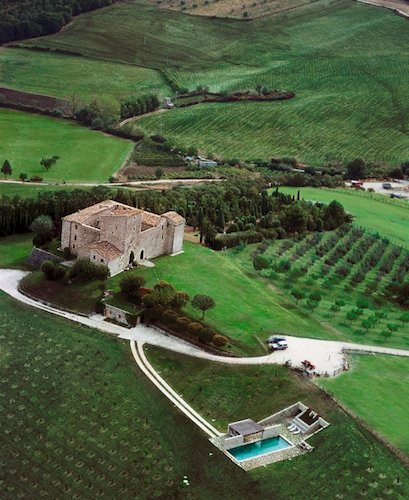 Location: Todi, Italy.
Built: 1100 AD.
Condition: In good condition.
Ownership / Access: Santoro family.
Notes: Rocca di Todi is a castle near Gubbio in Umbria, Italy.Erection of a fort at the site first began in the 9th and 10th centuries, by the commune of Gubbio. A document from 1073 recalls a substantial fortification at the site, referring to a deed of gift of a "mansum in curte Petroij". In 1257 a few feudal subordinates rose against Gubbio and submitted their castles to the town of Perugia. On 7 May 1257 Ugolino, count of Coccorano submitted the Castle of Petroia. On 24 March 1384.The castle was originally built in 1100 AD as a watch tower but later on evolved into a castle. The construction of Todi Castle was entrusted to three architects namely Marcello Confetti, Giorgio Leoni and Vittorio Garatti. In the 18th century, the castle was acquired by the Paprini family who were the most important landowners in the area of Moruzze and Todi. and then, in 1974, by Italian Ambassador Giuseppe Santoro and since then is owned by the Santoro family. In 1980, the TodiCastle was declared a national monument. The restoration work itself took as long as ten years. The name of the castle was changed several times over the centuries. It was known as Capecchio, Cassa Treia and Casa Arsiccia at various times. The area of this estate spans to 45-acres. The Castle was recently recognized as Residenza d 'Epoca, belonging to the National Heritage. It is also part of the prestigious Italian Castle circuit Institute, an international organization under the auspices of the UNESCO. The Santoro Family, who are the present owners of Todi Castle, that along with surrounding structures, including a former olive oil mill, a stone farmhouse and a cottage, function as rental accommodations.