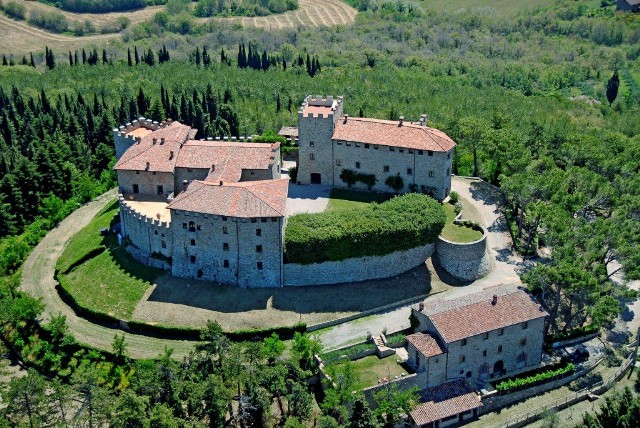 Location: Orvieto, Italy.
Built: 13th century.
Condition: In good condition.
Ownership / Access: Privately owned. Now a family farm and tourist site.
Notes: Castle of Montegiove was established in the 13th century in Umbria, Italy. It lies at 627 meters above sea-level, on the border between the old city states of Orvieto and Perugia. The castle continues to operate privately as a family farm and tourist site.The castle was founded by the Bulgarelli, Counts of Marsciano, during the 13th century on the ruins of an old temple dedicated to Iuppiter Elicius (Jupiter), hence its name, Montegiove. The exact year in which the castle was founded is uncertain, although it certainly existed in 1282, as documents show that in that year a request was issued for the construction of an oratory on the estate of the Castle of Monte Giove, which was granted and nowadays is known as La Scarzuola. Ownership of the castle changed hands more than once over the centuries amidst battles and feuds, in 1780 it became of ownership of the Misciattelli family, and it has been in their family ever since. Still a family-run farm today, the estate covers nearly 1200 hectares of land, covered with olive groves, woods, pastures and vineyards. The principal products of the estate are Orvietano Rosso d.o.c. and Umbria rosso i.g.t wines, extra-virgin olive oil, as well as truffles as the estate has a truffle reserve where two species can be found, the scorzone and uncinato. On the estate's pastures the free range Chianina cattle, the white cows so typical of the area, graze. The Castello di Montegiove is private property and is open for cellar tours and wine tastings upon reservation.