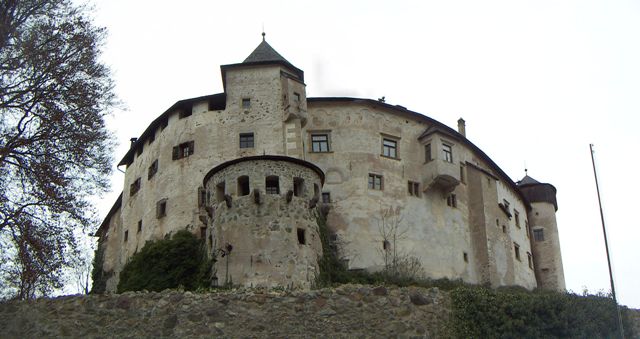 Location: Völs am Schlern, Italy.
Built: 1200.
Condition: In good condition.
Ownership / Access: Open to public.
Notes: Prösels Castle (German: Schloss Prösels; Italian: Castello di Presule) is a castle in the Gothic style which stands on the high plain below the Schlern mountain, in South Tyrol. Prösels is a location within the municipal boundaries of the commune of Völs am Schlern (Fiè allo Sciliar). During the Peasants' War of 1525 the castle was briefly occupied by the revolting subservient farmers, who burnt all the documents in the vain hope of destroying all proof of their debts and tithes. The uprising was squashed and six leaders executed. Leonhard of Völs also instigated the burning of nine local woman for witchcraft. To deflect blame placed on him by his subjects for a high infant mortality rate, Leonhard found nine women, had them tortured and after they confessed burnt at the stake for witchcraft. Most probably the high infant mortality was due to the farmers being starved and very poor owing to Leonhard's very high taxes. The woman confessed that they had "stolen the babies and ridden on their brooms to the Schlern where they had eaten the babies together with the devil." The many local legends about the so-called Schlernhexen (Schlern witches) date back to this time. The castle remained in the hands of the family until its last member, Felix, Freiherr von Völs, died childless in 1810. For the next 50 years the castle stood empty and nearly fell into ruins. Between 1860 and 1978 the castle changed hands no fewer than 14 times, suffering periods of decay followed by attempted restoration before finally being abandoned to its fate. However, in 1981 the Kuratorium Schloss Prösels (Prösels Castle Curatorship) was formed to restore the building; the work was completed the following year. Guided visits are available during the summer months and during the Christmas holidays, various cultural events are held here including concerts, exhibitions and theatrical performances. Permanent displays include; A collection of weapons and suits of armour, The "Batzenhäusl" restaurant collection of paintings (The "Batzenhäusl" being the oldest restaurant in the city of Bolzano),and a modern art collection.