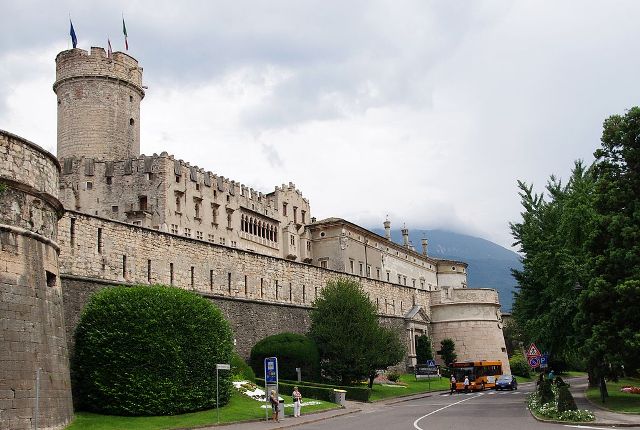 Location: Trento, Italy.
Built: 13th century.
Condition: In good condition.
Ownership / Access: Home to the Provincial Gallery of Art since 1992.
Notes: Buonconsiglio Castle (Italian: Castello del Buonconsiglio) is a castle in Trento, northern Italy.The castle was originated from a fortified building was erected in the 13th century next to the city's walls. This first building was called Castelvecchio ("Old Castle"), and was the seat of the Bishopric of Trent from the 13th century onwards to the end of the 18th century. The castle is composed of a series of buildings of different eras, enclosed by a circle of walls in a slightly elevated position above the town.The, as called, Castelvecchio is the oldest and most dominant building of the entire housing development. The Magno Palazzo is the sixteenth expansion in the forms of the Italian Renaissance, wanted by the Prince Bishop and Cardinal Bernardo Clesio (1485-1539), the third part, in the southern end of the complex is the known Eagle tower, which preserves the famous Cycle of the Months, one of the most fascinating pictorial cycles of profane the late Middle Ages.Bishop George of Liechtenstein was the first to enlarge the castle, in the late 14th century, turning it into a well-styled residence. The Castelvecchio was further modified by Johannes Hinderbach, who had the double loggiato and the Gothic entrance gate built. In the first decades of the 16th century, Bishop Bernardo Clesio had a new residence, called Palazzo Magno ("Grand Palace") built in Renaissance style alongside the old castle. The last great addition was the so-called Giunta Albertiana, from the name of Bishop Francesco Alberti Poja (1686), with which the Castelvecchio and the Palazzo Magno were united The castle remained the seat of the Prince-Bishops until 1803. Used by the Austrians as military barracks and, later, as a jail, it decayed. In the 1920s, when Trento was returned to Italy, it became seat of a National Museum and was restored. Since 1992 it is home to the Provincial Gallery of Art. According to legend, it was connected by a secret tunnel to the city's cathedral, which allowed the prince-bishops to move unseen between them. In 2015, rights were granted for the first time to film inside of the castle, for Sebastiano Serafini's music video for his single "Akane.