Castle of the Counts of Modica 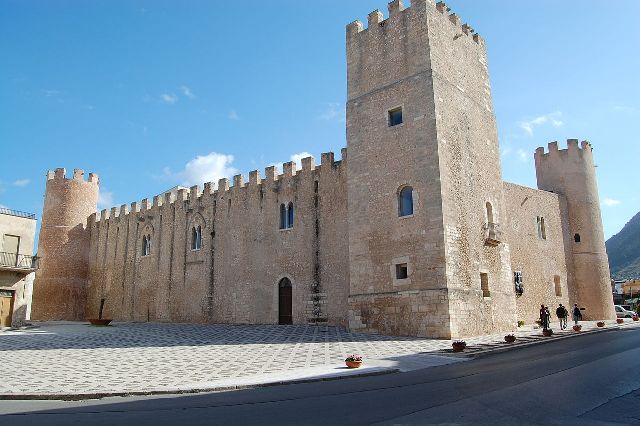 Castle of the Counts of Modica Photo - Esculapio - Own work - Wikipedia - lic. under CC BY-SA 3.0

Location: Alcamo, Italy.
Built: 1340.
Condition: In good condition.
Ownership / Access: Ethnographic Museum and of the Historical Regional Vintage Wines Stock.
Notes: The Castle of the Counts of Modica (or Castle of Alcamo) is a medieval castle situated in the town centre of Alcamo, in the province of Trapani, Sicily, southern Italy.The construction of the castle was started by the Peralta family at about 1340 and was finished in 1350, under the feudatories Enrico and Federico Chiaramonte, who used it as a mansion and a defensive structure. In 1392 king Martino and his wife were hosted in the castle after the Chiaramontes' defeat. In 1534 the castle was attacked by the Islamic pirate Barbarossa. On September 1st 1535 the emperor Carlo V, during his return from his Tunisi victory, lodged in one of its towers with his court and the infanta Eleonora d'Aragona.[2] Beginning from 1583 and until 1589 it had three restorations. Since 1828, further to a sentence by Trapani Law Court, Alcamo municipality came into possession of the castle and in the following years it was used as a seat of municipal offices, prison and stable. In 1870 there was another restoration.After the last restorations (made between 2000 and 2010), it has been used as the seat of the Ethnographic Museum and of the Historical Regional Vintage Wines Stock.

Castle of the Counts of Modica Links:

Castle of the Counts of Modica On Wikipedia