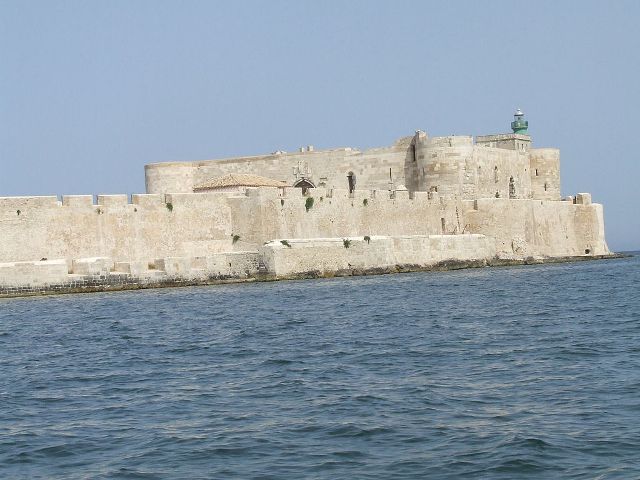 Location: Syracuse, Italy.
Built: 1038.
Condition: In good condition.
Ownership / Access: Now a local tourist attraction in Syracuse.
Notes: Castello Maniace is a citadel and castle in Syracuse, Sicily. It is situated at the far point of the Ortygia island promontory, where it was constructed between 1232 and 1240 by the Emperor Frederick II. It bears the name of George Maniakes, the Byzantine general who besieged and took the city in 1038. Originally, one could only enter the castle over a bridge spanning a moat (now filled). A notable feature of the castle is the decorated portal. Today the castle is open to public and is a local tourist attraction in Syracuse. The first fort was built here in 1038 by George Maniakes, a Greek general and later the Catepan of Italy, after he captured Syracuse from the Arabs on behalf of the Emperor Michael IV. Frederick II, as King of Sicily, had his architect Riccardo da Lentini rebuild it in 1232-1240. King Peter III of Aragon resided here with his family in 1288. From 1305 to 1536 the castle was used as residence by numerous queens of Sicily. In the 15th century it was used as a prison. In the following century it was included in the fortification defending the harbour and the city. A huge explosion damaged it in 1704, after which it was renovated and adapted to the use of guns.

How To Get To Castello Maniace (Map):