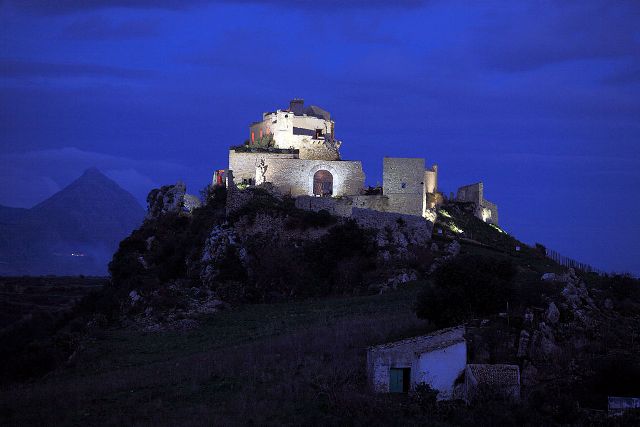 Location: Alcamo, Italy.
Built: Before 1093.
Condition: Abandoned.
Ownership / Access: Owned by the municipality, Not open to public.
Notes: The Calatubo Castle (Latin: catrum Calathatubi; Arabic: قلعة ﺍوبي - Qal'at 'Awbi; Italian: Castello di Calatubo) is a fortress located near the town of Alcamo, Sicily, southern Italy. The site has remains of a settlement of the Elymians and a necropolis. Being next to A29 motorway, it has fallen into disrepair and is therefore closed to visitors, although the Town Council of Alcamo has often expressed the desire to recover it.The Calatubo Castle is actually an architectural complex, consisting of the structure of the original castle that has undergone several changes over the centuries. This complex is large 150×35 meters and stands on a limestone rock that lies at an altitude of about 152 m above sea level and that dominate with its height the surrounding area. From the position of castle you can clearly see Mount Bonifato and the Gulf of Castellammare. The castle is inaccessible on three sides due to the steep walls of rock on which it is built. The only practicable access is located in the west,[1] which leads to the first line of defense of the castle via a ramp with large steps. From the first line of defense, which includes among other things a well, a church hall and other premises, you can arrive at a court which communicates with the second circle of walls through a portal,p to the third circle of walls, which comprises an oblong tower. Finally the core of the castle, located in the southern part of the fortress, is rectangular with an area of 7×21.50 m.