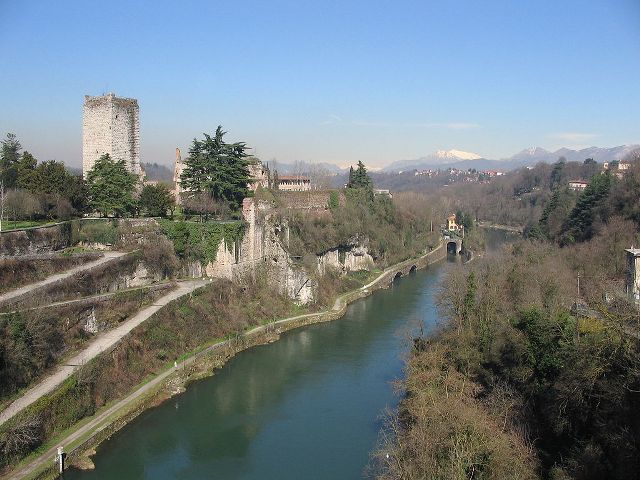 Location: Trezzo sull'Adda, Milan, Italy.
Built: --
Condition: Ruined.
Ownership / Access: --
Notes: Trezzo's main attraction is the massive castle which belonged to the Visconti family in the 14th century. Protected by the Adda on two sides, it had a 42-metre (138 ft) high square tower on the third one. Its fortified bridge (see Trezzo sull'Adda Bridge) was 72 metres (236 ft) long, the longest bridge span for several centuries, built on three different levels, passing 25 metres (82 ft) over the waters. Due to its strategic position, the castle was contested first by Emperor Frederick Barbarossa and Milan, in the 12th century, and later by the Visconti and the Torriani families. The castle was destroyed or burnt several times, but was rebuilt on each occasion. The last reconstruction dates from 1370. It was commissioned by Bernabò Visconti, who was later imprisoned there until his death. On 23 October 1404, the castle was captured by Paolo Colleoni, father of the important condottiere Bartolomeo. The Visconti general Francesco Bussone recaptured it, partially demolishing it and starting its decline. In the 19th century it was used as a quarry for the construction of the Arena di Milano.