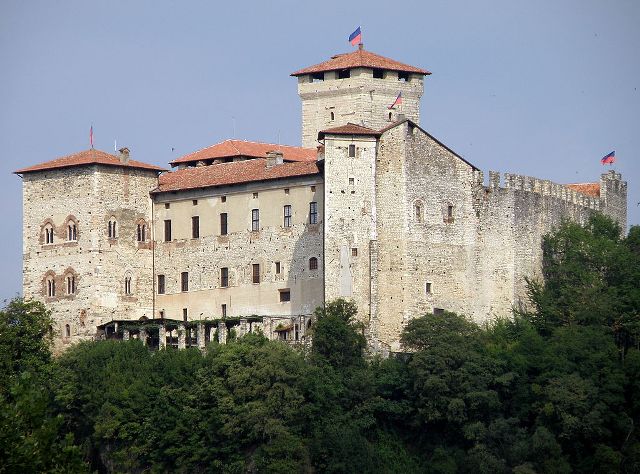 Location: Angera, Italy.
Built: 13th century.
Condition: In good condition.
Ownership / Access: Borromeo family.
Notes: Rocca Borromeo di Angera or Rocca d'Angera, also called Borromeo Castle, is a castle that stands on a lakeside hilltop in the limits of the town of Angera in the Province of Varese on the Southern shores of Lago Maggiore. It is visible from across the lake from Arona, where originally stood another castle formerly owned by the Borromeo family. Before 1227, the castle belonged to the Della Torre family, who lost the possession to the Visconti after the Battle of Desio (1277). In 1449, it passed into the ownership of the Borromeo family. It once belonged to the Visconti family, beginning with Bernabò Visconti and his wife, Beatrice della Scala. but it was purchased by the Borromeo family who expanded and refurbished the castle over the centuries. It still belongs to the Borromeo family. It is best known for it Hall of Justice (Sala di Giustizia) which still contains its original late 13th century depicting the victory of Ottone Visconti, archbishop of Milan, at the Battle of Desio. The castle suffered damage during bombardment in the second world war. The castle also contains a Museo della Bambola (Doll Museum), founded in 1988 by the wish of Princess Bona Borromeo Arese, and displays over a thousand dolls made between the 18th century and the present day.

How To Get To Rocca Borromeo di Angera (Map):