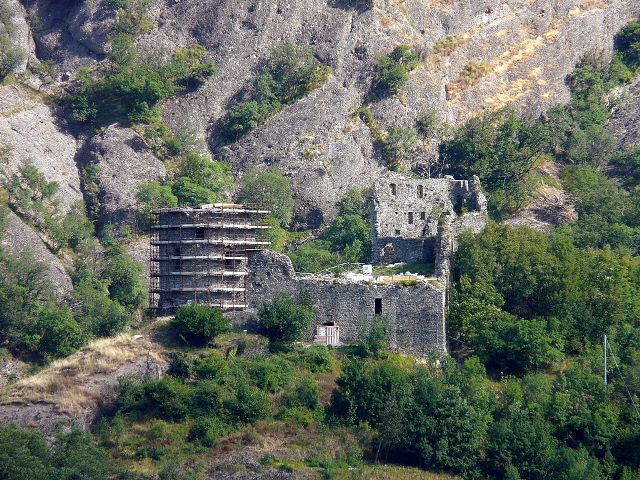 Location: Savignone, Italy.
Built: 1207.
Condition: Ruins.
Ownership / Access: Owned by the municipality.
Notes: Castello di Savignone now in ruins, was once a fortress and manor house as well as the subject of battles and sieges. It is also a place of legends. It is stuck on a pudding-rock - called the "Conglomerate of Savignone" - dominating from a height of 150 meters the town of Savignone, in the upper Scrivia valley. Its surrounding wall is strengthened to the south from the tower or semi-circular bastion and of course the other side defended from the precipice. The located at the southern tower is massive, with a "horseshoe shaped", ie rectilinear inward and outward circular walls. Partially intact in close-ups outside, where it opens a window on the top floor and a gunboat on the basement floor. This type fitted to support the onslaught of the first guns was similar to that of the four towers that flanked the nearby castle of Montoggio, in the restructuring of the latter by Sinibaldo Fieschi. In that case it was four corner towers, from the outer perimeter with a curved plant. Ways were taken from the latest innovations in Genoa those of the Bridle fortresses and Castelletto, in the fifteenth century. Inside this tower still it preserves a stretch of scale and the remains of the hollows of the chimneys to the first and second floors. The castle is built on two levels elevation, according to the embankment of the bastion and the underground rooms or basements connected to it, using the shelf of rock on which it stands. In the plant at the center of the city wall is the courtyard, which corresponded to the square discovery where the soldiers gathered. It is accessed by a narrow staircase that comes from underground.