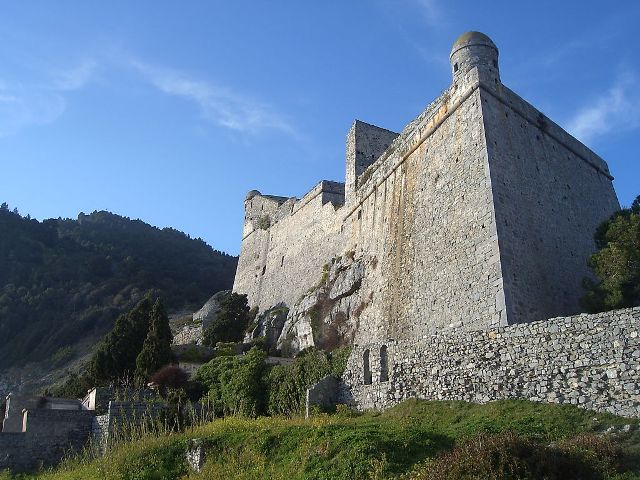 Location: Porto Venere, Italy.
Built: 1161-19th century.
Condition: In good condition.
Ownership / Access: Owned by the municipality.
Notes: Castello di Porto Venere is a defensive building in via the Castle in Porto Venere, in the Gulf of Poets in the province of La Spezia. The fortress is situated on a rocky outcrop overlooking the fishing village and is one of the most impressive military architecture of the Republic of Genoa in the Ligurian Riviera. We still do not know the actual date of construction of the first fortified building; the only available data and received historians date back to 1139 when the Republic of Genoa was able to gain control of the village of Porto Venere, through the local lords of Vezzano, defending themselves well to the east by the rival Pisa. In 1161 the castle was rebuilt in a more dominant than the existing area near the church of St Peter and the new building it was practically attached to another fortified structure, comprised of two identical towers. In the early years after the new building the two fortifications had two distinct castellans and will be lower in the building that will house the local mayor.

How To Get To Castello di Porto Venere (Map):