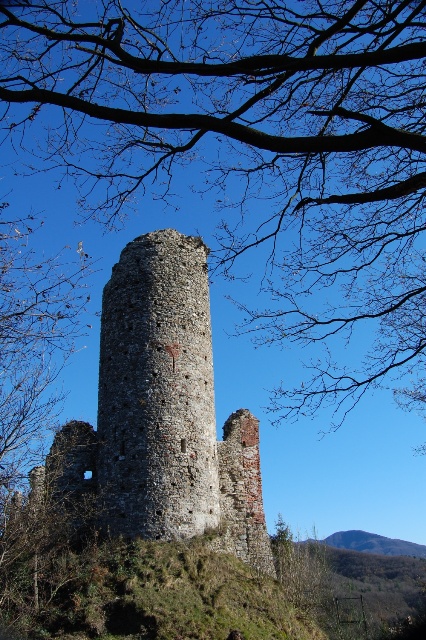 Location: Ronco Scrivia, Italy.
Built: 1121-1182.
Condition: Ruins.
Ownership / Access: Owned by the municipality.
Notes: Castello di Borgo Fornari was a defensive and noble house building situated in the hamlet of Borgo Fornari in Ronco Scrivia, in the upper Scrivia valley.Located ten minutes walk from the main street of Borgo Fornari, down an alley called Rian-na, its construction dates from 1121 to 1182 on a hill overlooking the underlying important communication route between the valley Scrivia and then feud Genoese Voltage. According to some sources, its construction was ordered by the Fornari family, originating in Genoa and will result in the name of the village was the seat of a contemporary parish church dedicated to Santa Maria Assunta. Later the property passed to the noble Genoese family of Spinola who stayed here. A few years after the change of ownership the castle was the center of conflict between the two families and Spinola Doria. In the fifteenth century the fortress was again the scene of clashes between Spinola and the Republic of Genoa. Filippo Maria Visconti, an ally of the first, managed to get possession of the fortress that gave, as stipulated in the peace agreement of May 1419, Pope Martin V. Some texts testify to the stop at the castle of King Louis XII of France in 1506, Charles V, Francis I in 1525, Philip II of Savoy and Maximilian II in 1551.