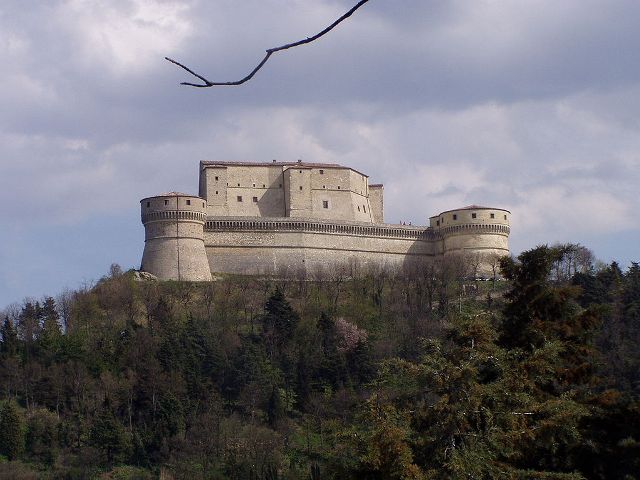 Location: San Leo, Italy.
Built: --
Condition: In good condition.
Ownership / Access: Currently houses a museum and an art gallery in arms.
Notes: The Fortress of San Leo is a castle on the border of the Romagna and Marche; the castle is best known as the site where Count Cagliostro died. It was one of the palaces owned by Federico da Montefeltro and his wife Battista Sforza and was a fortified, palatial retreat. It is now a museum.In the fortress there are two distinct parts: the keep, with its square turrets and the gothic entrance is the older part and residential wing; and the more recent round towers and massive corbeled wall that connects them. The two towers, the wall, and the keep surround the so-called Place d'Armes. The area is dotted with rocky peaks that rise steeply from the sea cliffs. On each of these peaks, the ruins of a castle or fort recall a tumultuous past. To the visitor who walks up the Romagna plain, the City-Fortress appears as a huge shield of high smooth rock. It appears like a ship with the bow to the East, the bell tower like a mast, and the handful of houses scattered around.

Forte di San Leo On Wikipedia
Photographs of the village, castle and museum