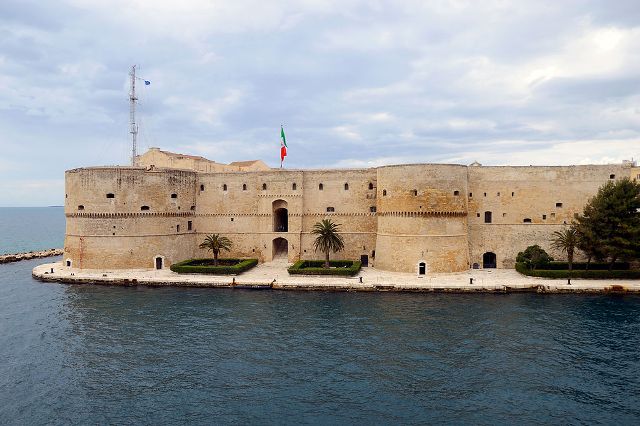 Location: Taranto, Italy.
Built: 916, 1486-1492.
Condition: In good condition.
Ownership / Access: Owned by the navy.
Notes: The Aragonese Castle of Taranto (or Castel Sant'Angelo), deals with its rectangular plan and the vast central courtyard, the extreme corner of the island on which stands the ancient village of the town. The first part of the castle dates back to 916, when the Byzantines started building the "fortress" to protect against attacks by the Saracens and the Republic of Venice. This first fortification consisted of tall towers and narrow, from which they fought with spears, arrows, stones, and boiling oil. In 1481 he was made a first navigable canal, the narrowest of the current and with irregular shores, to allow the passage of small boats and improve the defensibility of the castle. In 1486, Ferdinand II of Aragon commissioned the architect and military engineer Francesco di Giorgio Martini to expand the castle and give it the current structure in order to replace the type of medieval towers designed for defense pouncing. The use of guns in fact, following the discovery of gunpowder, needed large and low towers, circular in shape to cushion the impact of cannon balls, equipped with ramps or slides that allowed the movement of pieces from a tower to 'other, and come with a large, sturdy railing with specific openings for guns. The new fortification was to include seven towers, four of which are joined together to form a quadrilateral, and the remaining three aligned along the ditch until the Small Sea. The four towers were named respectively Saint Cristofalo, to St Lawrence, to the Flag and the Virgin of the Annunciation. With the arrival of the Habsburgs in 1707, the castle lost its importance as a military work, becoming a harsh prison, but with Napoleon Bonaparte returned to its original function. In 1883, one of five towers that linked the curtain wall, the one dedicated to Sant'Angelo, along with the Mater Dei towers, Monacella Vasto and civic wall were demolished to make way for the current navigable channel and the swing bridge. The work was completed in 1887, when the castle became a seat of the Navy. Inside the castle, you can admire the chapel of St. Leonard, reconsecrated in 1933 after being used over the years to the gatehouse and stables. Inside there are two slabs carparo against the walls, which represent a holy bishop and a medieval warrior armed. You may also notice the coat of arms of Philip II of Spain. Particular is also the one that served as a torture room, whose ceiling has a central hole through which were amplified and propagated the screams of the victims, psychologically intimidating other prisoners..

How To Get To Castello aragonese (Taranto) (Map):