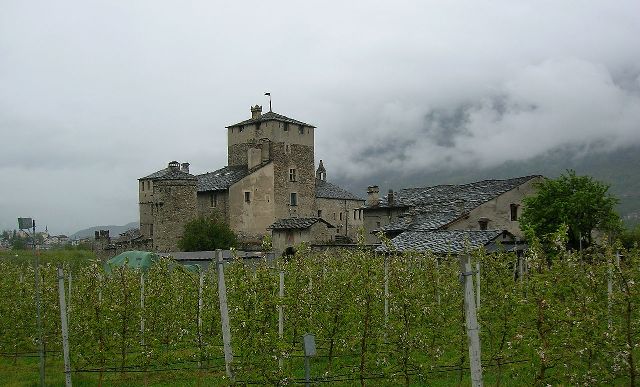 Location: Saint-Pierre, Italy.
Built: 10th and 12th century.
Condition: In good condition.
Ownership / Access: Open to public.
Notes: Sarriod de la Tour Castle is a castle in the town of Saint-Pierre by the Dora Baltea River, in Northwestern Italy's Aosta Valley. The original castle was typical of the style built between the 10th and 12th centuries, and was greatly expanded by Jean Sarriod in 1420 and his son, Antoine, in 1478. The north wing's ground floor features a wooden-ceilinged "Hall of Heads", named for its decorative motifs.There are about 150 medieval castles, tours and fortified houses in the Aosta Valley. The castle is visible from the National Road No. 26 which runs from Ivrea to the Little St Bernard Pass. Sarriod de la Tour is open to visitors year round.