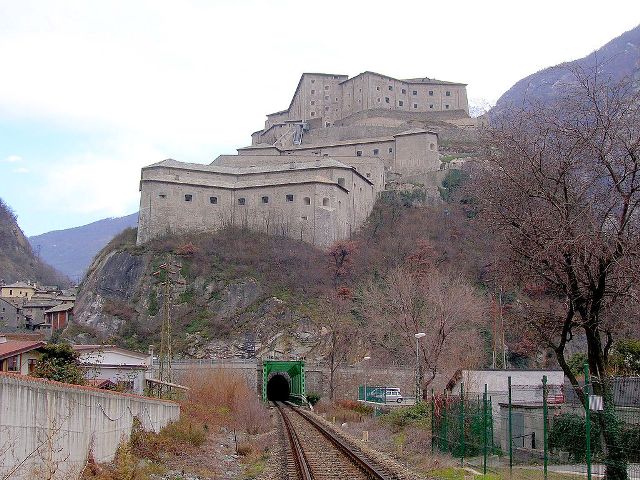 Location: Bard, Italy.
Built: 1830–1838.
Condition: Restored.
Ownership / Access: --
Notes: Fort Bard, also known as Bard Fort (Italian: Forte di Bard; French: Fort de Bard), is a fortified complex built in the 19th century by the House of Savoy on a rocky prominence above Bard, a town and comune in the Aosta Valley region of northwestern Italy. Fort Bard has been completely restored after many years of neglect. In 2006 it reopened to tourists as the Museum of the Alps, it has additional art exhibitions and galleries. In the summer, the main courtyard is used to host musical and theatrical performances.The fort, which is at the entrance to the Aosta Valley, is located in a narrow gorge above the Dora Baltea river. It has been used for millennia to control the historic route between Italy and France. The current fortifications were built by Charles Albert of Savoy between 1830 and 1838. It replaced a 10th-century castle that had, itself, been built on an earlier structure founded by Theodoric I in the 5th century. The castle was under the control of the powerful local lords of Bard until the middle of the 13th century when ownership passed to the House of Savoy. Under their control, the defences were strengthened and improved. On May 14, 1800, a 40,000-strong French army was stopped by 400 Austro-Piedmontese soldiers at Fort Bard. They held the pass for two weeks, completely ruining Napoleon Bonaparte's plan of making a surprise attack on the Po Valley and Turin. When he heard the news, he named the fort vilain castel de Bard. Bonaparte then gave the order himself, that the fort should be razed to the ground. It was not until 1830 that Charles Albert of Savoy, fearing new attacks from the French, ordered that the fort be rebuilt. The task was entrusted to the famed Italian military engineer, Francesco Antonio Olivero. The work, which took eight years to complete, created a fort with two distinct levels. The upper part had conventional battlements whereas the lower part had 50 gun ports in autonomous casemates that were designed to offer mutual protection if attacked. A total of 416 soldiers could now be billeted in the 283-room fort. The upper level had a courtyard which contained the arsenals and barracks. The fort had enough ammunition and food supplies for three months. By the end of the 19th century, the fort had lost its military value and fell into disuse. However, the Italian Army did continue to use the fort as a powder magazine. When it closed in 1975, ownership passed to the government of the Autonomous Region of Valle d'Aosta. In the 1980s the fort opened as a tourist attraction despite many buildings needing urgent repair.