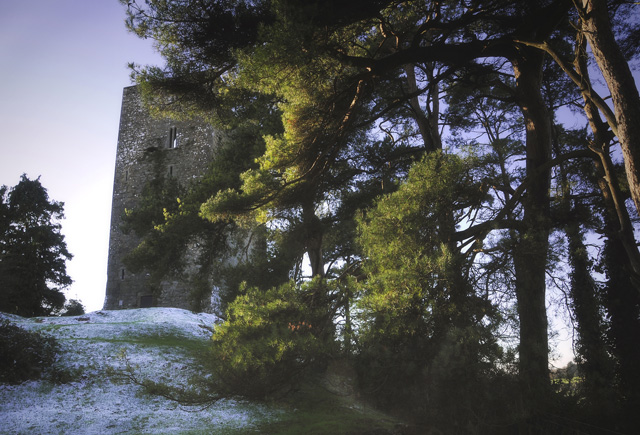 Location: River Bride, County Cork, Ireland.
Built: 1554.
Condition: Partially Ruined.
Ownership / Access: Private.
Notes: In 1554 the Fitzgeralds, Earls of Desmond, began building Conna Castle on a high limestone rock overlooking the River Bride. Construction was completed ten years later. The castle and its estate was seized by the English and passed into the hands of Walter Raleigh, the English settler. The rightful heir to the castle, James FitzThomas (The Sugan Earl) staged a rebellion to capture the castle. He failed, was captured and imprisoned in the Tower of London. The castle then went through a series of different owners before ending up in the hands of the Earl of Cork. It is believed that Oliver Cromwell passed by the castle and fired cannons at it before moving on. In 1653, the castle suffered a fire in which three of the steward's daughters were killed. The castle continued to move from owner to owner until Hilary L'Estrange purchased the castle in 1851. He passed it on to his son, Rev A. G. K. L'Estrange, on whose death in 1915, the castle was willed into the care of the state, the first such property to be so willed.