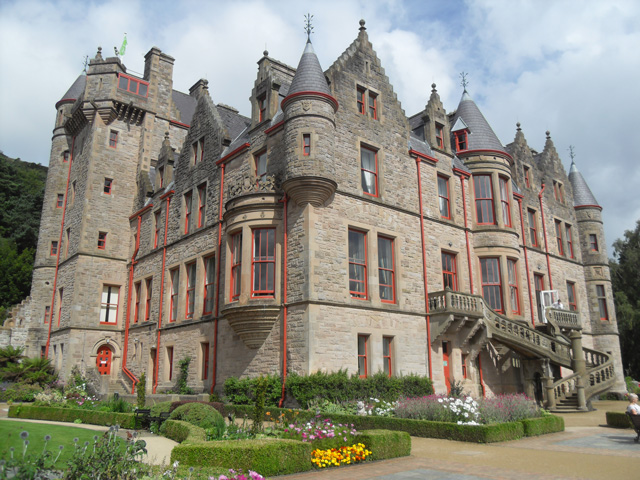 Location: Cavehill Country Park, Belfast, Northern Ireland.
Built: 12th century.
Condition: Intact.
Ownership / Access: Private.
Opening times: Check their website for more info.
Price of admission: Check their website for more info.
Notes: Belfast Castle is set on the slopes of Cavehill Country Park, Belfast, Northern Ireland in a prominent position 400 feet (120 m) above sea level. Its location provides unobstructed views of the city of Belfast and Belfast Lough. The original Belfast Castle, built in the late 12th century by the Normans,[1] was located in the town itself, flanked by the modern day High Street, Castle Place and Donegall Place in what is now Belfast city centre. This was the home of The 1st Baron Chichester (better known as Sir Arthur Chichester), but was burned down in 1708, leaving only street names to mark the site. Rather than rebuild on the original site, the Chichesters decided to build a new residence in the city's suburbs, today's Belfast Castle emerging as a result. The building that stands today was built from 1811-70 by The 3rd Marquess of Donegall. It was designed in the Scottish baronial style by Charles Lanyon and his son, of the architectural firm Lanyon, Lynn and Lanyon. After Donegall's death and the family's financial demise, The 8th Earl of Shaftesbury completed the house. It was his son, The 9th Earl of Shaftesbury, who presented the castle to the City of Belfast in 1934. In 1978, Belfast City Council began a major refurbishment over a period of ten years at a cost of over two million pounds. The architect was the Hewitt and Haslam Partnership. The building officially re-opened to the public on 11 November 1988. The castle boasts an antiques shop, a restaurant and visitors centre and it is a popular venue for conferences, private dining and wedding receptions.

How To Get To Belfast Castle (Map):