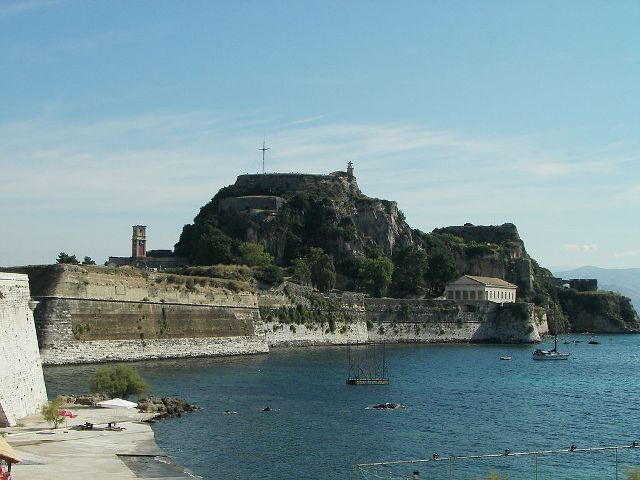 Location: Corfu, Greece.
Built: Early 15th century.
Condition: In good condition.
Ownership / Access: Greece.
Notes: Old Fortress of Corfu (Greek: Παλαιό Φρούριο, Venetian: Fortezza Vecchia) is a Venetian fortress in the city of Corfu. The fortress covers the promontory which initially contained the old town of Corfu that had emerged during Byzantine times. Before the Venetian era the promontory, which lies between the Gulf of Kerkyra to the North and Garitsa Bay to the south, was defended by Byzantine fortifications which the Venetians largely replaced with fortifications of their own design. As part of their defensive plans the Venetians separated the promontory from the rest of the city of Corfu by creating the Contrafossa, a moat which is a sea channel connecting the Gulf of Kerkyra to the North with the Bay of Garitsa to the South, converting the citadel into an artificial island. The fort successfully repulsed all three major Ottoman sieges: the great siege of 1537, the siege of 1571 and the second great siege of Corfu in 1716. The town of Corfu got its Western name from the twin peaks of the fortress ("Coryphe" in Greek).