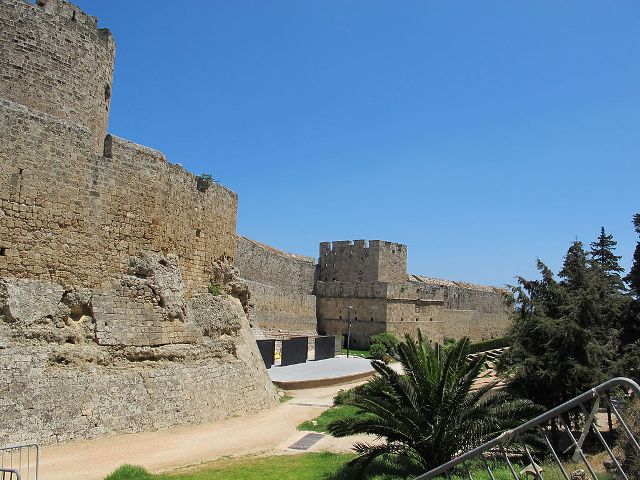 Location: Rhodes, Greece.
Built: Antiquity–16th century.
Condition: Mostly intact.
Ownership / Access: --
Notes: Fortifications of Rhodes are shaped like a defensive crescent around the medieval town and consist mostly in a modern fortification composed of a huge wall made of an embankment encased in stone, equipped with scarp, bastions, moat, counterscarp and glacis. The portion of fortifications facing the harbour is instead composed of a crenellated wall. On the moles towers and defensive forts are found. They were built by the Knights Hospitaller of Saint John by enhancing the existing Byzantine walls starting from 1309, the year in which they took possession of the island after a three-year struggle. Like most of the defensive walls they were built with a technique[3] called rubble masonry which allows for a great mass capable of withstanding the gunshots with smooth external stone faces to avoid climbing. The defence of different portions of fortifications was assigned to different Langue (tongues) of Knights. The North face was under the rule of the Grand Master, then moving West and South the posts were held by the Langue of France and Alvernia, the Langue of Spain (Spanish and Portuguese), the Langue of Germany (English and German), and the Langue of Italy. Bastions and terrepleins still hold the name of the langue involved (e.g. Bastion of Italy, terreplein of Spain).

Fortifications of Rhodes On Wikipedia