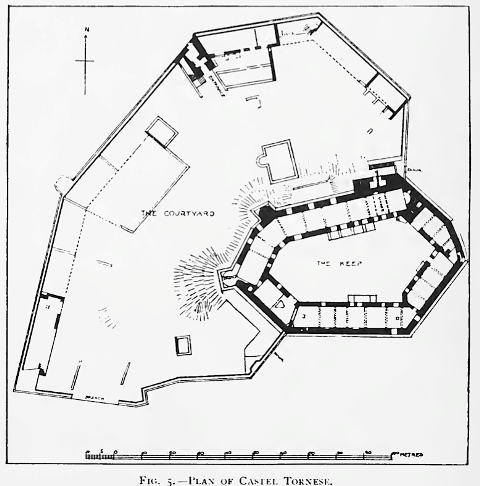 Location: Northwestern Elis, Greece.
Built: c. 1220/23.
Condition: Fairly intact, partial demolition.
Ownership / Access: --
Notes: Chlemoutsi (Greek: Χλεμούτσι or Χλουμούτσι) is a medieval castle in the northwest of the Elis regional unit in the Peloponnese peninsula of southern Greece, in the Kastro-Kyllini municipality. It was built in the early 1220s by the Crusader rulers of the Principality of Achaea as their main stronghold, and is perhaps the finest fortification of the early period of Frankish rule in Greece preserved in the country today. The castle is located on a small plateau 226 metres (741 ft) above sea level, and comprises a central hexagonal keep, built around an inner courtyard and containing two-storeyed halls along its entire length, and complemented by an outer wall enclosing an outer yard on its western side. The castle is largely preserved in its original 13th-century state, with only minor later modifications for the installation of artillery. Located near the Principality's capital of Andravida and the chief port of Glarentza, Chlemoutsi played a central role in the Principality's history, but was never actually besieged. After coming under Byzantine rule in 1427, it was captured in 1460 by the Ottoman Empire, along with the rest of the Byzantine Despotate of the Morea. In Ottoman times, minor additions were made to provide platforms for artillery, but the castle progressively lost its significance and was completely deserted by the late 18th century. In 1825, during the Greek War of Independence, part of its outer wall was demolished to prevent the Greek rebels from using it. Today it is a preserved monument open to the public.