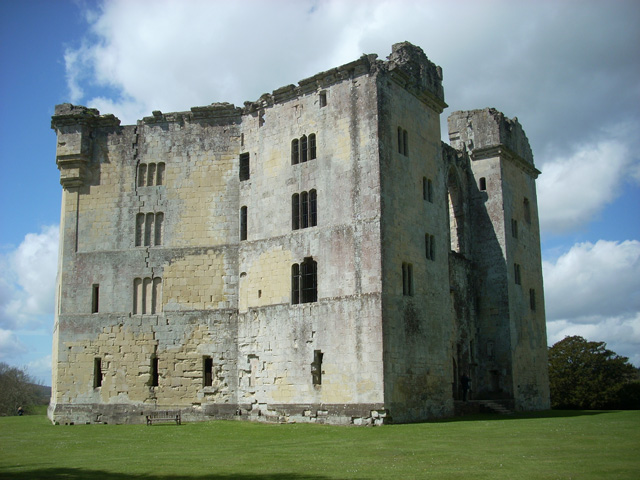 Location: Wardour, Wiltshire, England.
Built: c. 1393.
Condition: Ruins.
Ownership / Access: English Heritage.
Opening times: Check their website for more info.
Price of admission: Check their website for more info.
Notes: Wardour Castle is located at Wardour, near Tisbury, in the English county of Wiltshire, about 15 miles (24 km) west of Salisbury. It is managed by English Heritage who have designated it as a grade I listed building, and is open to the public. The original castle was partially destroyed during the Civil War.The castle was built on land previously owned by the St Martin family, but when Sir Lawrence de St Martin died in 1385 it was handed over to John, the fifth Baron Lovell for reasons unknown. It was built using locally quarried Tisbury greensand,with William Wynford as the master mason, after Baron Lovell had been granted permission by Richard II in 1392.It was inspired by the hexagonal castles then in fashion in parts of the Continent, particularly in France; but its own six-sided design is unique in Britain, as is its inclusion of several self-contained guest suites. After the fall of the Lovell family following Francis Lovell's support of Richard III, the castle was confiscated in 1461 and passed through several owners until bought by Sir Thomas Arundell of Lanherne in 1544. The Arundells were an ancient and prominent Cornish family, the principal branches of which were seated at the manors of Lanherne, Trerice, Tolverne and Menadarva in Cornwall. The family held several estates in Wiltshire. The castle was confiscated when Sir Thomas - a staunch Roman Catholic - was executed for treason in 1552, but in 1570 was bought back by his son, Sir Matthew Arundell, later a Sheriff and Custos Rotulorum of Dorset. The Arundells, led by Thomas Arundell, 1st Baron Arundell of Wardour, subsequently became known as some of the most active of the Catholic landowners in England at the time of the Reformation; thus they were naturally Royalists in the English Civil War. During that conflict, Thomas Arundell, 2nd Baron Arundell of Wardour, was away from home on the King's business and had asked his wife, Lady Blanche Arundell, aged 61, to defend the castle with a garrison of 25 trained fighting men. On 2 May 1643 Sir Edward Hungerford, with 1,300 men of the Parliamentarian Army, demanded admittance to search for Royalists. He was refused and laid siege, setting about the walls with guns and mines. After five days the castle was threatened with complete destruction. Lady Arundell agreed to surrender, and the castle was placed under the command of Colonel Edmund Ludlow. Lord Arundell had died of his wounds after the Battle of Lansdowne, and his son, Henry 3rd Lord Arundell, next laid siege to his own castle, blew up much of it and obliged the Parliamentary garrison to surrender in March 1644. The family slowly recovered power through the English Commonwealth and the Glorious Revolution, until the eighth Baron, Henry Arundell, borrowed sufficient funds to finance rebuilding. This was done by the prominent Palladian James Paine. Paine built Wardour New Castle, but left the Wardour Old Castle as an ornamental feature. In stylistic terms the New Castle is not a castle at all, but a symmetrical neoclassical country house with a main block built around a central staircase hall and two flanking wings. Paine integrated the ruins of the Old Castle into the surrounding parkland, intending it to be viewed as a romantic ruin. The castles, old and new, have been featured in several films. The Old Castle appeared in the 1991 Kevin Costner feature Robin Hood: Prince of Thieves, and more recently used as a film location for The Journey to Aresmore set to be released in 2015. The New Castle served as the dance school in Billy Elliot. The cover of Sting's album Ten Summoner's Tales was photographed inside Old Wardour Castle.

How To Get To Wardour Castle (Map):