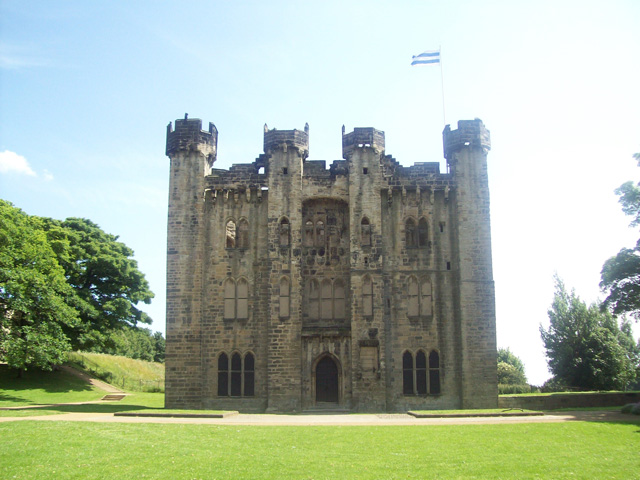 Location: Sunderland, Tyne and Wear, England.
Built: c. 1400.
Condition: Ruins.
Ownership / Access: English Heritage.
Opening times: Check their website for more info.
Price of admission: Check their website for more info.
Notes: Hylton Castle is a ruined stone castle in the North Hylton area of Sunderland, Tyne and Wear, England. Originally built from wood by the Hilton (later Hylton) family shortly after the Norman Conquest in 1066, it was later rebuilt in stone in the late 14th to early 15th century. The castle underwent major changes to its interior and exterior in the 18th century and it remained the principal seat of the Hylton family until the death of the last "baron" in 1746. It was then Gothicised but neglected until 1812, when it was revitalised by a new owner. Standing empty again until the 1840s, it was briefly used as a school until it was purchased again in 1862. The site passed to a local coal company in the early 20th century and was taken over by the state in 1950. One of the castle's main features is the range of heraldic devices found mainly on the west facade, which have been retained from the castle's original construction. They depict the coats of arms belonging to local gentry and peers of the late 14th to early 15th centuries and provide an approximate date of the castle's reconstruction from wood to stone. Today, the castle is owned by English Heritage, a charity which manages the historical environment of England. The surrounding parkland is maintained by a community organisation. The castle and its chapel are protected as a Grade I listed building and a Scheduled Ancient Monument. As of 2008, a survey is being carried out to determine the future of the site.

How To Get To Hylton Castle (Map):