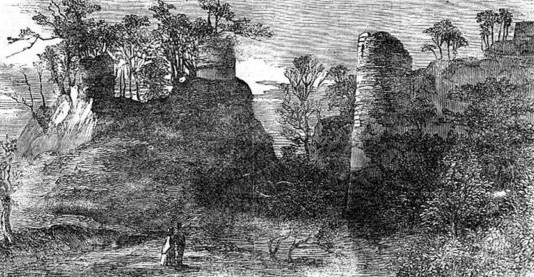 Location: Hawkstone Park, Market Drayton, Shropshire, England.
Built: 13th century.
Condition: Fragmentary remains.
Ownership / Access: Castle open to public.
Opening times: Check their website for more info.
Price of admission: Check their website for more info.
Notes: Red Castle, the first castle at Hawkstone Park, was built in 1227 by Henry de Audley (Alditheley), Constable of Shrewsbury, and Constable of Bridgnorth. About the same time (1227-1232) Henry built Heighley Castle at Madeley, Staffordsire, and made it the family caput. Subsequent generations of Audleys began as, Lords of Heleigh Castle, and expanded from there.John Tuchet, 4th Baron Audley (1371-1408) inherited the title via his sister, then survived the uprising of Owain Glyndwr and the Battle of Shrewsbury in 1403, where he fought against Henry "Hotspur" Percy. His son James Tuchet, 5th Baron Audley (1398-1459) was killed by Sir Roger Kynaston, whilst leading the House of Lancaster at the Battle of Blore Heath in 1459. The Audleys forfeited the title when James Tuchet, 7th Baron Audley (c. 1463-1497) led a rebellion against King Henry VII of England in 1497 and was executed. The castle fell into ruin, but the title was restored to John Tuchet, 8th Baron Audley in 1512. Eventually the lands passed via Sir Andrew Corbet of Moreton Corbet to Sir Rowland Hill, 1st Baronet Hill of Hawkstone (1705-1783), who lived nearby at Shelvock Manor. He was the great, great, great, grandson of Sir Rowland Hill, the first Protestant Lord Mayor of the City of London and Member of Parliament for the City of London in 1533, and who had owned Hawkstone and nearby Soulton. Richard Hill, 'The Great Hill', traveller and diplomat, had made a fortune by 'lucrative arithmetick' (sic), raised the family into the aristocracy and rebuilt Hawkstone Hall as the family seat. Sir Rowland Hill, 1st Baronet (1705-1783), landscaped the Red Castle and extended the estate, with walks over the four natural hills and a wide range of follies that included a hermit to dispense wisdom to visitors.