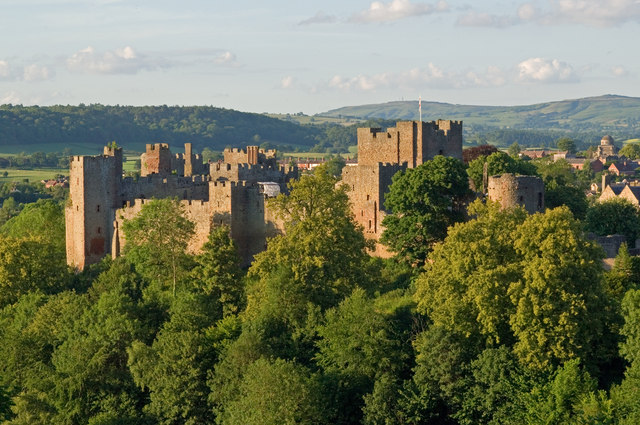 Location: Ludlow, Shropshire, England.
Built: 11th-14th century.
Condition: Ruins.
Ownership / Access: Earl of Powis and the Trustees of the Powis Estate.
Opening times: Check their website for more info.
Price of admission: Check their website for more info.
Notes: Ludlow Castle is a ruined medieval fortification in the town of the same name in the English county of Shropshire, standing on a promontory overlooking the River Teme. The castle was probably founded by Walter de Lacy after the Norman conquest and was one of the first stone castles to be built in England. During the civil war of the 12th century the castle changed hands several times between the de Lacy's and rival claimants, and was further fortified with a Great Tower and a large outer bailey. In the mid-13th century, Ludlow was passed on to Geoffrey de Geneville who rebuilt part of the inner bailey, and the castle played a part in the Second Barons' War. Roger Mortimer acquired the castle in 1301, further extending the internal complex of buildings, and the Mortimer family went on to hold Ludlow for over a century. Richard, the Duke of York, inherited the castle in 1425, and it became an important symbol of Yorkist authority during the Wars of the Roses. When Richard's son, Edward IV, seized the throne in 1461 it passed into the ownership of the Crown. Ludlow Castle was chosen as the seat of the Council in the Marches of Wales, effectively acting as the capital of Wales, and it was extensively renovated during throughout the 16th century. By the 17th century the castle was luxuriously appointed, hosting cultural events such as the first performance of John Milton's masque Comus. Ludlow Castle was held by the Royalists during the English Civil War of the 1640s, until it was besieged and taken by a Parliamentarian army in 1646. The contents of the castle were sold off and a garrison was retained there for much of the interregnum. With the Restoration of 1660, the Council was reestablished and the castle repaired, but Ludlow never recovered from the civil war years and when the Council was finally abolished in 1689 it fell into neglect. Henry Herbert, the Earl of Powis, leased the property from the Crown in 1772, extensively landscaping the ruins, and his brother-in-law, Edward Clive, bought the castle outright in 1811. A mansion was constructed in the outer bailey but the remainder of the castle was left largely untouched, attracting an increasing number of visitors and becoming a popular location for artists. After 1900, Ludlow Castle was cleared of vegetation and over the course of the century it was extensively repaired by the Powis Estate and government bodies. In the 21st century it is still owned by the Earl of Powis and operated as a tourist attraction. The architecture of Ludlow reflects its long history, retaining a blend of several styles of building. The castle is approximately 500 by 435 feet (152 by 133 m) in size, covering almost 5 acres (2.0 ha). The outer bailey includes the Castle House building, now used by the Powis Estate as offices and accommodation, while the inner bailey, separated by a trench cut out of the stone, houses the Great Tower, Solar block, Great Hall and Great Chamber block, along with later 16th century additions, as well as a rare, circular chapel, modelled on the shrine in the Church of the Holy Sepulchre. English Heritage notes that the ruins represent "a remarkably complete multi-phase complex" and considers Ludlow to be "one of England's finest castle sites".

How To Get To Ludlow Castle (Map):