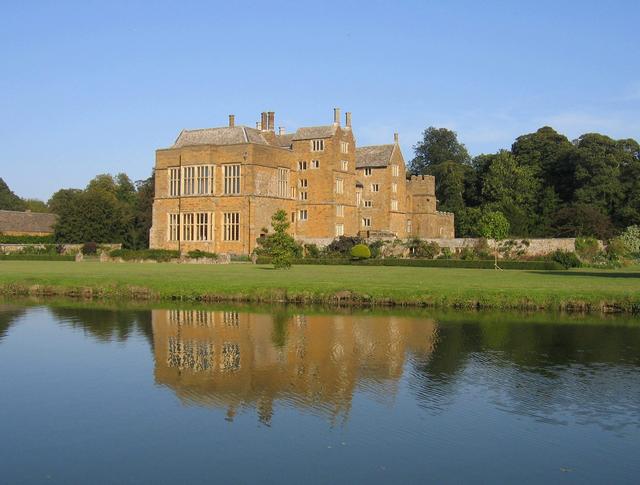 Location: Banbury, Oxfordshire, England.
Built: 14th-15th century.
Condition: Intact.
Ownership / Access: Historic house open to public.
Opening times: Check their website for more info.
Price of admission: Check their website for more info.
Notes: Broughton Castle is a medieval fortified manor house located in the village of Broughton which is about two miles south-west of Banbury, Oxfordshire, England on the B4035 road (grid reference SP418382). It is the home of the Fiennes (in full Twisleton-Wykeham-Fiennes) family, Barons Saye and Sele. The castle sits in parkland and is surrounded by a wide moat. It opens to the public over the summer. The castle was built as a manor house by Sir John de Broughton in 1300 at a location where the confluence of three streams created a natural site for a moated manor. The house was sold in 1377 to William of Wykeham, Bishop of Winchester, and has remained in the same family since that time. The original house was crenellated by Sir Thomas Wykeham in 1406. In 1451 it passed by inheritance to the Fiennes family, Barons Saye and Sele. Beginning in 1550 Richard Fiennes transformed the medieval manor into a house in the Tudor style, significantly expanding the building. James I stayed at Broughton Castle on several occasions. In the 17th century William Fiennes, 1st Viscount Saye and Sele, known as "Old Subtlety", was one of the leading activists against Charles I. As a result the castle was used by Parliamentarian sympathisers, such as John Pym and John Hampden, as a meeting place in the decade leading up to the Civil War. The 1st Viscount raised troops to fight against the king at the inconclusive Battle of Edgehill in 1642. In the following days, Royalist troops besieged the castle, quickly overcoming the defenders and occupying the castle for a time. Following the end of hostilities, reconstruction work needed to be undertaken to repair damage inflicted by Royalist cannon. The 1st viscount had evaded signing Charles I's Death Warrant and was able to make his peace with the crown after the English Restoration. Broughton fell into decay in the 19th century, but was eventually rescued by Frederick Fiennes, 16th Lord Saye and Sele, who brought in the prominent Victorian architect Sir George Gilbert Scott. At the turn of the century the house was rented by the Edwardian socialite Lady Algernon Gordon-Lennox, who transformed the gardens and hosted Edward VII at the castle. It is still the home of the Fiennes family, until the 2010s by the 21st Baron and his wife, and in 2015 by his son and his family.

How To Get To Broughton Castle (Map):