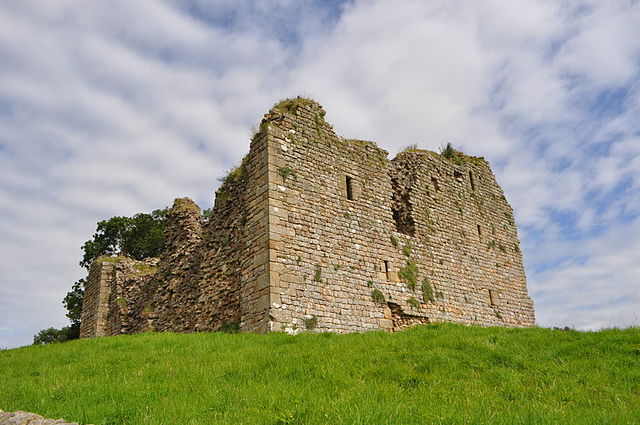 Location: Northumberland, England.
Built: 14th century.
Condition: Fragmentary ruins.
Ownership / Access: Northumberland National Park. Accesible Open space.
Notes: Thirlwall Castle is a 12th century castle in Northumberland, England, on the bank of the River Tipalt close to the village of Greenhead and approximately 20 miles (32 km) west of Hexham. It was built in the 12th century, and later strengthened using stones from nearby Hadrian's Wall, but began to fall into disrepair in the 17th century. The site is protected by Grade I listed building and Scheduled Ancient Monument status. The home of the Thirlwall family, it was fortified in about 1330 by John Thirlwall. In a survey of 1542 it was reported as in the ownership of Robert Thirlwall and in a 'measurable good' state of repair. Sir Percival Thirlwall of Thirlwall Castle was killed at the Battle of Bosworth whilst fighting in the Yorkist cause in 22 August, 1485. He was Richard�s standard-bearer in the final charge at Bosworth. He held up the standard even after his legs had been cut from under him (possible source Bennett, Michael. The Battle of Bosworth, 1985, rev. 1993. pp. 114 and 116).

How To Get To Thirlwall Castle (Map):