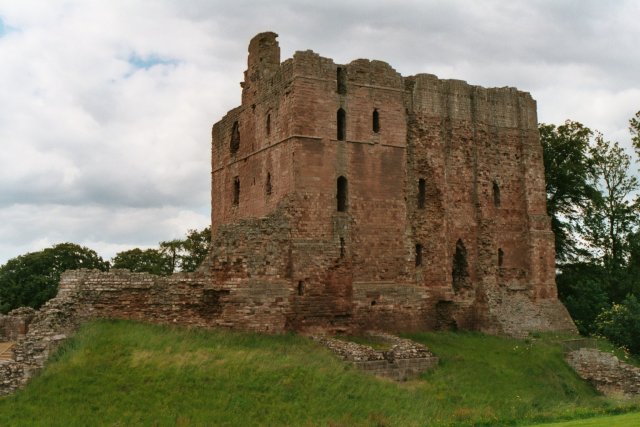 Location: Northumberland, England.
Built: 12th century.
Condition: Ruins.
Ownership / Access: English Heritage.
Opening times: Check their website for more info.
Price of admission: Check their website for more info.
Notes: Norham Castle is a partly ruined castle in Northumberland, England, overlooking the River Tweed, on the border between England and Scotland. It is a Grade I listed building and a Scheduled Ancient Monument. The castle saw much action during the wars between England and Scotland. The castle was originally founded when Ranulf Flambard, Bishop of Durham from 1099 to 1128, gave orders for its construction in 1121, in order to protect the property of the bishopric in north Northumberland, from incursions by the Scots. In 1136 David I of Scotland invaded Northumberland and captured the castle. It was soon handed back to the bishopric, but was captured again in 1138 during another invasion. This time, the structure of the castle was substantially damaged. It remained derelict until Hugh de Puiset, Bishop of Durham from 1153 to 1195, had the castle rebuilt. The work was probably directed by Richard of Wolviston, who was the bishop's architect. In 1174 Hugh de Puiset supported the rebels in a revolt against Henry II, during which the Scottish king, William the Lion invaded Northumberland. The rebels were defeated and as a result, Bishop Hugh was forced to relinquish Norham Castle to the crown. The castle was administered by a constable appointed by the crown and garrisoned by royal soldiers. This continued until 1197, two years after Hugh's death, when it as restored to his successor, Philip of Poitou. The latter showed himself to be loyal to King John. When Philip died in 1208 the castle reverted to royal control.The castle stands on the south bank of the River Tweed, high above the river, so that the north side is protected by a steep slope. A deep ravine protected the east side and an artificial moat was dug round the west and south sides to complete the protection. The castle had and inner and outer ward. The inner ward stood on a mound and was separated from the outer ward by a moat, crossed by a drawbridge. The main entrance to the castle was the strongly fortified West Gate leading into the outer ward. There was an additional gate to the south of the outer ward, known as the Sheep Gate. The inner ward was entered by crossing a drawbridge across the moat and entering through a fortified gate on the west side. The drawbridge has now been replaced by a wooden bridge. On the north side of the inner ward was the bishop's hall, measuring 60 ft by 30 ft (18.3m by 9.1m), now in ruins. To the east side of the inner ward stands the keep, measuring 84 ft by 60 ft (25.6m by 18.3m) and 88 feet (26.8 m) high. The keep is said to have been built by Hugh de Puiset. Norham Castle is now in the care of English Heritage and is open to visitors.

How To Get To Norham Castle (Map):