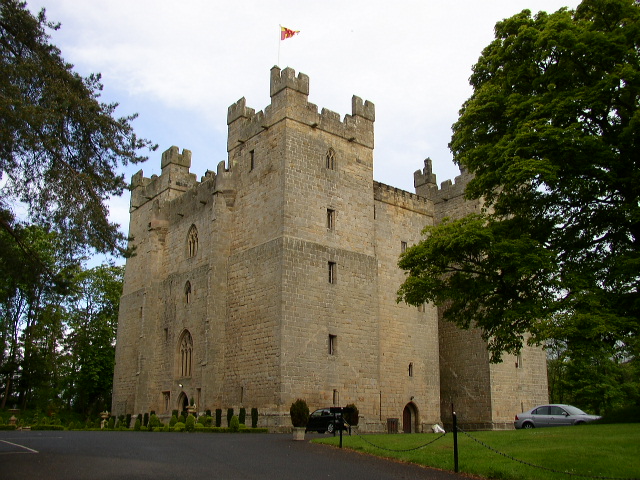 Location: Haydon Bridge, Northumberland, England.
Built: c. 1350.
Condition: Restored.
Ownership / Access: Hotel.
Opening times: Check their website for more info.
Price of admission: Check their website for more info.
Notes: Langley Castle is a restored medieval tower house,[1] now operated as a hotel, situated in the village of Langley in the valley of the River South Tyne some 3 miles (5 km) south of Haydon Bridge, Northumberland, England. It is a Grade I listed building. It was built in the middle of the 14th century by Sir Thomas de Lucy as a great H-shaped tower of four storeys. Before this the site was the seat of the Barons of Tynedale in the 12th century, from whom descend the Tyndall family. It was attacked and severely damaged in 1405 by the forces of Henry IV in the campaign against the Percys and Archbishop Scrope. It remained as a ruin until it was bought and restored by a local historian, Cadwallader Bates, in 1882. Bates died in 1902 and his wife Josephine continued the restoration. After she died in 1932 the building remained empty until it was used as a barracks in the Second World War following which it was used as a girls' school. In the Eighties It was brought and renovated by the Robb family before being sold to the hotel company who now own it. It has since been converted into a luxury hotel set in a woodland estate of 10 acres (40,000 m2). One of the more remarkable features of the building is the south west tower which is occupied by no less than 12 garderobes, four to each floor. It is owned by Dr Madnick an American and is managed by Mr. A. Phillips.

How To Get To Langley Castle (Map):