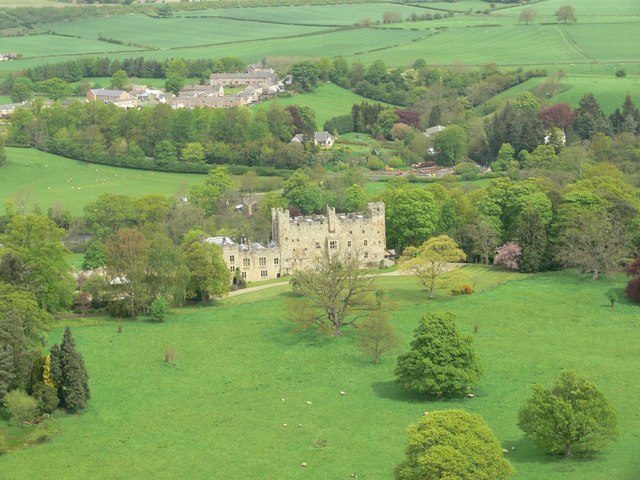 Location: Hexham, Northumberland, England.
Built: 13th-14th century.
Condition: Restored.
Ownership / Access: Private.
Notes: Haughton Castle is a privately owned country mansion situated to the north of the village of Humshaugh on the west bank of the North Tyne. It is some 10 km north of Hexham, Northumberland (grid reference NY918729). It was built originally in the 13th century as a tower house and enlarged and fortified in the 14th century. At this time the castle was owned by Gerald Widdrington and, although it was still owned by the Widdringtons in the early 14th century, the Swinburns were living in it By the 16th century the castle fell into disrepair and ruin and it was attacked by Border reivers. A survey of 1541 reported the roof and floors to be "decayed and gone". The property was acquired by the Smith family in about 1640, but in 1715 a further survey stated the building to be ruinous. Significant alterations were carried out for the Smiths between 1816 and 1845, latterly by architect John Dobson to convert the ruin into a substantial mansion. The Crawshaw family came into possession in 1862[4] and a west wing was added for them by Anthony Salvin in 1876. Part of the castle served as a hospital during the second world war. It is now an oblong tower house and one of the best preserved hall houses in the north of England. It is a Grade I listed building. In 1888 it was acquired by the Cruddas family and it is currently owned by the Braithwaite family.