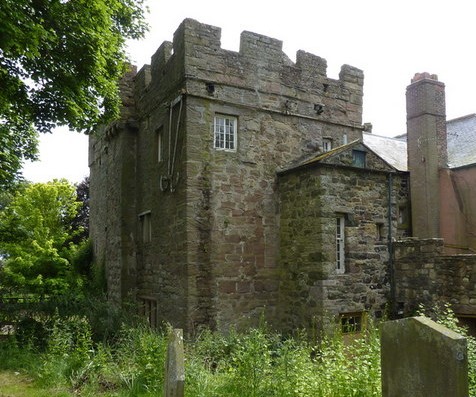 Location: Embleton, Northumberland, England.
Built: 14th century.
Condition: Intact.
Ownership / Access: Private.
Notes: Embleton Tower is a peel tower and Grade I listed building in the village of Embleton in Northumberland, England. Tradition states that in 1395, the tower was built to protect the minister and church goers of Embleton's Church of the Holy Trinity after the village suffered from a raid by the Scots. It was provided for the vicar of Embleton by Merton College, Oxford, who held the patronage of the parish, in 1332. According to the Montagu Francis Finch Osborn (1843-1910), vicar of Embleton in 1884, the vicarage was erected at three different periods; by 1416, the Vicar's Turris de Emyldon was known to exist. The tower was built in 1395. Mentioned as the vicar's property in 1415, the tower was remodelled in the 16th century.In about 1828, a vicarage, designed in the Tudor style by architect John Dobson, was built on one side of the tower. From 1875 to 1884, the vicarage was occupied by the historian and clergyman Mandell Creighton and his family. He began his History of the Papacy at the vicarage; he and his wife Louise between them wrote a total of 15 books while there. Peter Karney, the son of Bishop Arthur Karney, was the vicar from 1954 to 1974; on his retirement the vicarage passed into private hands and became known as Embleton Tower.

How To Get To Embleton Tower (Map):