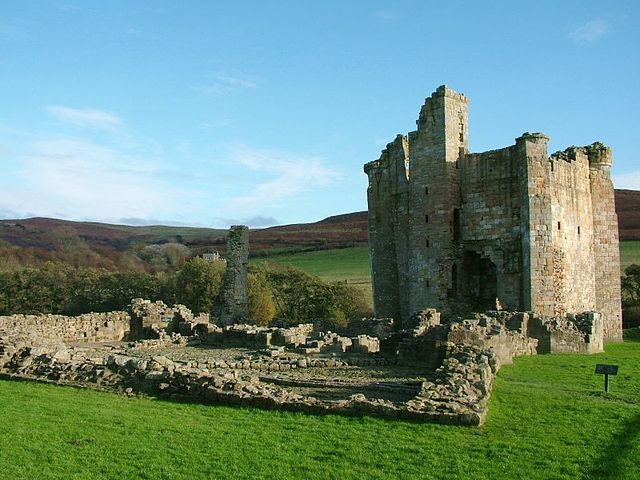 Location: Alnwick, Northumberland, England.
Built: 14th century.
Condition: Fragmentary ruins.
Ownership / Access: English Heritage.
Opening times: Check their website for more info.
Price of admission: Check their website for more info.
Notes: Edlingham Castle is a small castle ruin, having Scheduled Ancient Monument and Grade I listed building status, in the care of English Heritage, in a valley to the west of Alnwick, Northumberland, England. It has been described as "...one of the most interesting in the county", by Nikolaus Pevsner, the architectural historian Edlingham itself is little more than a hamlet with a church alongside the castle. The ruins are mostly laid low though much of the solar tower still stands despite an impressive crack running several stories down to ground level. The foundations and part of the walls of the hall house, gatehouse, barbican and other courtyard buildings are still visible, most dating from the 16th century. The castle - more properly a fortified manor house typical of many medieval houses in the North of England - guards one of the few approaches to Alnwick through the hills to its west. Its fortifications were increased in response to the border warfare which raged between England and Scotland in the period from about 1300 to 1600.

How To Get To Edlingham Castle (Map):