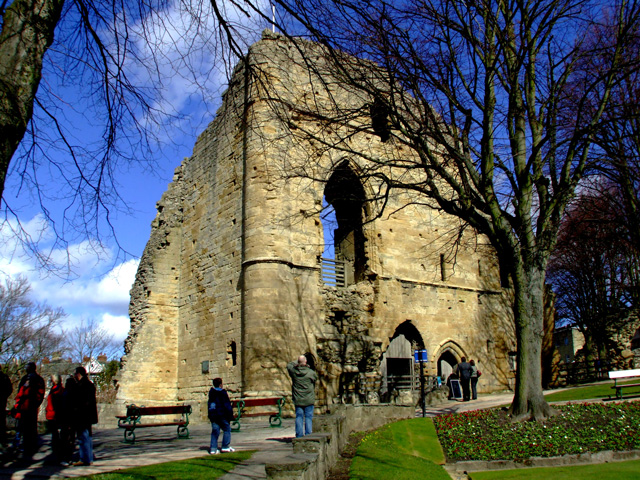 Location: Knaresborough, North Yorkshire, England.
Built: 12th-14th century.
Condition: Fragmentary ruins.
Ownership / Access: Duchy of Lancaster.
Opening times: Check their website for more info.
Price of admission: Check their website for more info.
Notes: Knaresborough Castle is a ruined fortress overlooking the River Nidd in the town of Knaresborough, North Yorkshire, England. The castle was first built by a Norman baron in c.1100 on a cliff above the River Nidd. There is documentary evidence dating from 1130 referring to works carried out at the castle by Henry I. In the 1170s Hugh de Moreville and his followers took refuge there after assassinating Thomas Becket. In 1205 King John took control of Knareborough Castle. He regarded Knaresborough as an important northern fortress and spent �1,290 on improvements to the castle.[citation needed] The castle was later rebuilt at a cost of �2,174 between 1307 and 1312 by Edward I and later completed by Edward II, including the great keep. John of Gaunt acquired the castle in 1372, adding it to the vast holdings of the Duchy of Lancaster. The castle was taken by Parliamentarian troops in 1644 during the Civil War, and largely destroyed in 1648 not as the result of warfare, but because of an order from Parliament to dismantle all Royalist castles. Indeed, many town centre buildings are built of 'castle stone'. The remains are open to the public and there is a charge for entry to the interior remains. The grounds are used as a public leisure space, with a bowling green and putting green open during summer. It is also used as a performing space, with bands playing most afternoons through the summer. It plays host to frequent events, such as FEVA. The property is owned by the monarch as part of the Duchy of Lancaster holdings, but is administered by Harrogate Borough Council.

How To Get To Knaresborough Castle (Map):