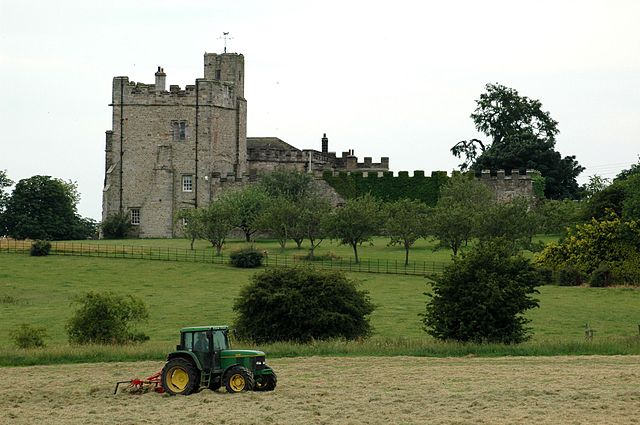 Location: North Yorkshire, England.
Built: 14th-15th century.
Condition: Restored.
Ownership / Access: Private. Not Open To Public.
Notes: Hornby Castle, Yorkshire is a grade I listed fortified manor house on the edge of Wensleydale between Bedale and Leyburn. Originally 14th century, it has been remodelled in the 15th, 18th and 20th centuries. It is constructed of coursed sandstone rubble with lead and stone slate roofs. The present building is the south range of a larger complex, the rest of which has been demolished. By 1889 the property belonged to a Colonel Foster and in 1929 to Sir Harold Parkinson. In 1930 the estate was broken up and most of the house demolished. A 16th century main doorway was preserved in the Burrell Collection, Glasgow. The remaining property, originally the south range, was bought in 1936 by Major-General Walter E Clutterbuck and passed down to Roger Clutterbuck and his wife Julia, who are restoring the parkland to grass and have introduced a small herd of bison. As a private residence the hall is not open to the public.

How To Get To Hornby Castle (Map):