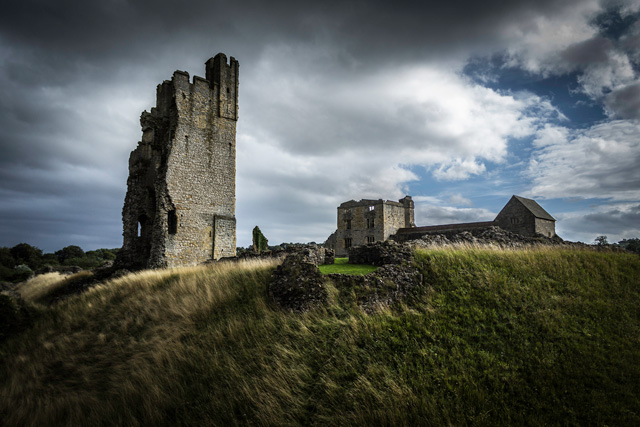 Location: Helmsley, North Yorkshire, England.
Built: 12th-13th century.
Condition: Fragmentary ruins.
Ownership / Access: Feversham family. English Heritage.
Opening times: Check their website for more info.
Price of admission: Check their website for more info.
Notes: Helmsley Castle (also known anciently as Hamlake) is a medieval castle situated in the market town of Helmsley, within the North York Moors National Park, North Yorkshire, England. During the English Civil War, the castle was besieged by Sir Thomas Fairfax in 1644. Sir Jordan Crosland held it for the king for three months before surrendering. Parliament ordered the castle to be slighted to prevent its further use and much of the walls, gates and part of the east tower were destroyed. However the mansion was spared. The castle had by this time been inherited by George Villiers, 2nd Duke of Buckingham who married Mary, daughter of Thomas Fairfax in 1657. After his death in 1687 the castle was sold to Charles Duncombe, a banker and politician who was knighted in 1699 and became Lord Mayor of London in 1708. His sister Mary's husband, Thomas Brown, inherited the castle on Charles's death in 1711. Thomas changed his name to Duncombe. He hired John Vanbrugh to build a country house at Duncombe Park overlooking the castle and left the castle to decay. Although it is still owned by the Feversham family of Duncombe Park, the castle is now in the care of English Heritage.

How To Get To Helmsley Castle (Map):