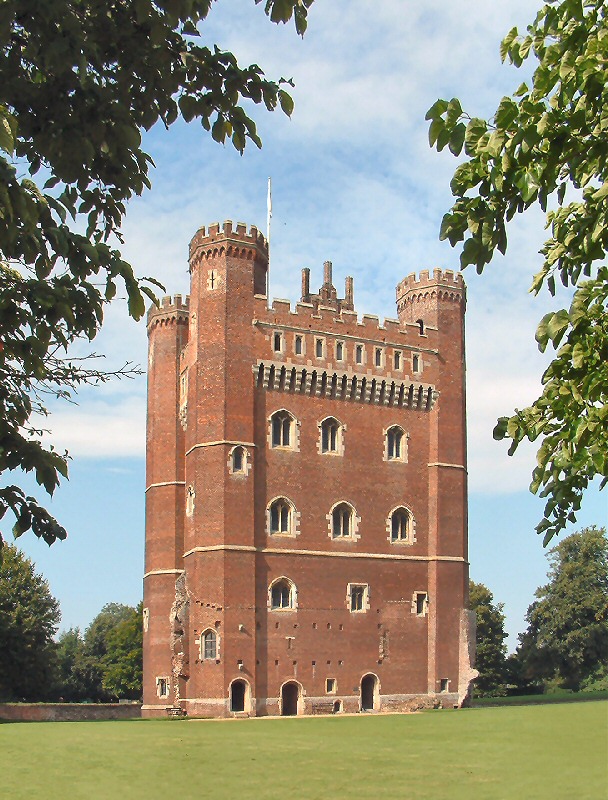 Location: Tattershall, Lincolnshire, England.
Built: 1430s.
Condition: Intact.
Ownership / Access: National Trust. Open to public.
Opening times: Check their website for more info.
Price of admission: Check their website for more info.
Notes: Tattershall Castle is a castle in Tattershall, Lincolnshire, England, about 12 miles (19 km) north east of Sleaford. It is in the care of the National Trust. Tattershall Castle has its origins in either a stone castle or a fortified manor house, built by Robert de Tattershall in 1231. This was largely rebuilt in brick, and greatly expanded, by Ralph, 3rd Lord Cromwell, Treasurer of England, between 1430 and 1450. Brick castles are less common in England than stone or earth and timber constructions; when brick was chosen as a building material it was often for its aesthetic appeal or because it was fashionable. The trend for using bricks was introduced by Flemish weavers. There was plenty of stone available nearby, but Cromwell chose to use brick. About 700,000 bricks were used to build the castle, which has been described as "the finest piece of medieval brick-work in England". Of Lord Cromwell's castle, the 130 foot (40 metre) high Great Tower and moat still remain. It is thought that the castle's three state rooms were once splendidly fitted out and the chambers were heated by immense Gothic fireplaces with decorated chimney pieces and tapestries. It has been said that the castle was an early domestic country mansion masquerading as a fortress. Cromwell died in 1456, and the castle was initially inherited by his niece, Joan Bouchier, but it was confiscated by the Crown after her husband's demise.[4] Tattershall Castle was recovered in 1560 by Sir Henry Sidney, who sold it to Lord Clinton, later Earl of Lincoln, and it remained with the Earls of Lincoln until 1693. It passed to the Fortesques, but then fell into neglect. It was put up for sale in 1910. Its greatest treasures, the huge medieval fireplaces, were still intact. When an American bought them they were ripped out and packaged up for shipping. Lord Curzon of Kedleston stepped in at the eleventh hour to buy the castle and was determined to get the fireplaces back. After a nationwide hunt they were found in London and returned. He restored the castle and left it to the National Trust on his death in 1925. Lord Curzon had undertaken restorations on it between 1911 and 1914. It remains today one of the three most important surviving brick castles of the mid-15th century. The experience of Tattershall led Lord Curzon to push for heritage protection law in Britain; this was enacted as the Ancient Monuments Consolidation and Amendment Act 1913.

How To Get To Tattershall Castle (Map):