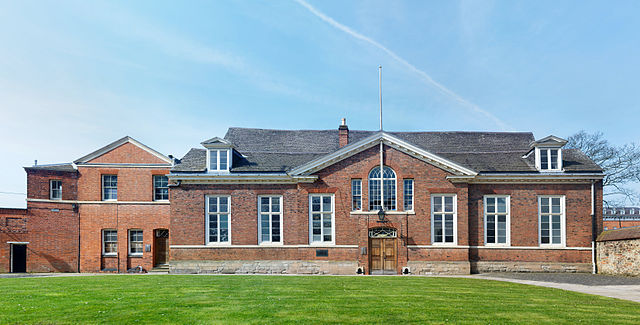 Location: Leicester, Leicestershire, England.
Built: 12th-13th century.
Condition: Fragments.
Ownership / Access: Local authority. Open to public.
Opening times: Check their website for more info.
Price of admission: Check their website for more info.
Notes: Leicester Castle is located in the city of the same name in the English county of Leicestershire. The complex is situated in the west of the city centre, between Saint Nicholas Circle to the north and De Montfort University to the south. Leicester Castle was built over the Roman town walls. According to Leicester Museums, the castle was probably built around 1070 (soon after the Norman Conquest in 1066) under the governorship of Hugh de Grantmesnil. The remains now consist of a mound, along with ruins. Originally the mound was 40 ft (12.2 m) high. Kings sometimes stayed at the castle (Edward I in 1300, and Edward II in 1310 and 1311), and John of Gaunt and his second wife Constance of Castile both died here in 1399 and 1394 respectively. Eventually, however, it was used mainly as a courthouse (sessions being held in the Great Hall), rather than a residence. Apart from being used for Assize Courts (J. M. Barrie visited regularly and spent many hours inside as reporter for a newspaper when the hall was used as a court house), the Great Hall was also used for sessions of the Parliament of England most notably the Parliament of Bats in 1426, when the conditions in London were not suitable. It is also known for its connections with the Plantagenet family. The Castle, the Turret Gateway, the Great Hall and "John of Gaunt's Cellar" (erroneously called a dungeon) are all Scheduled Ancient Monuments,and are variously listed buildings also. St Mary de Castro is a Grade I listed building. A section of the castle wall, adjacent to the Turret Gateway, has gun loops (holes) that were poked through the medieval wall to use as firing ports by the city's residents when parliamentarian Leicester was besieged, captured, and ransacked, by the royalist army in the 1640s during the English civil war. The third storey of the Turret Gateway was destroyed in an election riot in 1832.