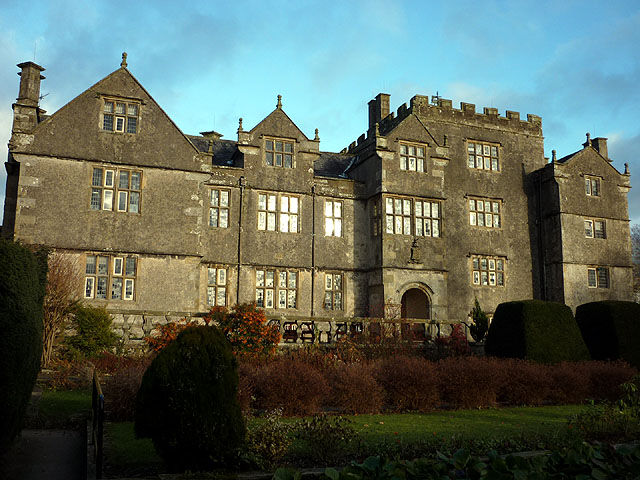 Location: Borwick, Lancashire, England.
Built: 14th century.
Condition: Intact.
Ownership / Access: Lancashire County Council. Outdoor education centre.
Opening times: Check their website for more info.
Price of admission: Check their website for more info.
Notes: Borwick Hall is a 16th century manor house at Borwick, Lancashire, England. It is a Grade I listed building and is now used as a residential outdoor education and conference centre by Lancashire County Council. The manor of Borwick is mentioned in the Domesday Book as being part of the estates of Roger of Poitou but the oldest parts of the building still in existence date from the 14th century when a pele tower was built on the site. It was bought c. 1590 by Roger Bindlosse. The tower was extended to a manor house by Roger in the early 1590s before he died in 1595. His son Robert inherited and was appointed High Sheriff of Lancashire in 1615. Robert's son Sir Francis Bindlosse predeceased him and so the estate passed to Francis's eldest son, Robert, who was created a baronet in 1641 and was elected MP for Lancashire in 1660. He also served twice as High Sheriff. He built a private Oratory on the estate. On his death in 1688 with no male heir the baronetcy became extinct and the estate passed to his only daughter, Cecilia, who had married William Standish. On her death there were again no male heirs and the estate passed to a daughter who had married Thomas Strickland of the Sizergh family. The Stricklands sold the Hall in 1854 for 28,000 to Col. Marton of Capernwray. By the early 19th century the Hall was falling into disrepair and was only repaired in the 1910s when it was leased to music critic John Alexander Fuller Maitland on the specific condition that he restore the building. He died there in 1936. After the Second World War during which the hall was used as a military base, the estate was sold to Lancashire Youth Clubs Association and later passed into the ownership of Lancashire County Council

How To Get To Borwick Hall (Map):