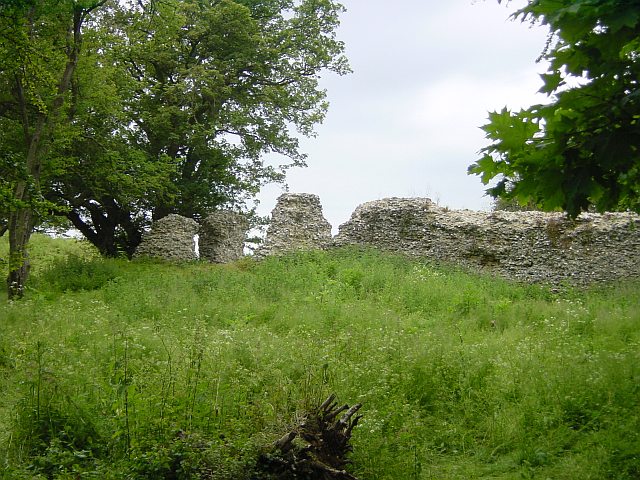 Location: Maidstone, Kent, England.
Built: 12th-century.
Condition: Ruins.
Ownership / Access: Kent County Council.
Notes: Thurnham Castle or Godard's Castle is situated to the north of the village of Thurnham which is 3 miles north-east of Maidstone, Kent (grid reference TQ808582). It is a 12th-century flint-built castle constructed by Robert de Thurnham in the reign of Henry II on a hill on the edge of the North Downs. One side of the bailey wall still stands 10 foot high and originally it enclosed an area of about a quarter of an acre. There is no visible stonework on the large motte. In the 12th century, the fortress belonged to the de Say family and then the de Thurnhams. Stephen & Robert de Thurnham crusaded with Richard the Lionheart and became trusted subjects, with Robert given command of English fleet and later made governor of Cyprus and his brother Stephen, given the honour of escorting the Queen Mother. One source indicates Robert de Thurnham never returned from the crusades and the castle was left to decay. A Charter in 1215, mentions the lands within the walls of the castle, which may indicate that it was already in ruins as reported in early 19th century. The site has been acquired by Kent County Council and included in the White Horse Millennium wood and Country Park Project. Much of the site has been cleared of undergrowth and public access has been provided.