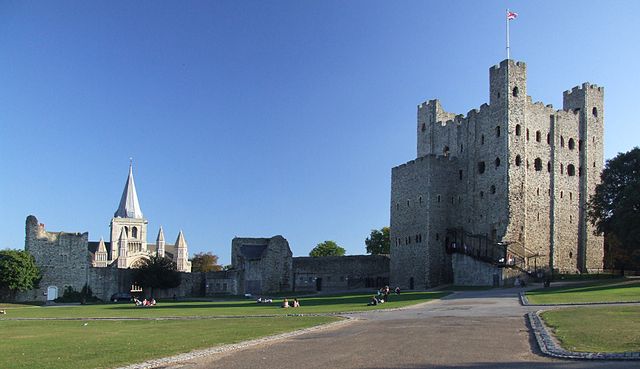 Location: Rochester, Kent, England.
Built: 1127.
Condition: Ruins.
Ownership / Access: English Heritage.
Opening times: Check their website for more info.
Price of admission: Check their website for more info.
Notes: Rochester Castle stands on the east bank of the River Medway in Rochester, Kent, South East England. The 12th century keep or stone tower, which is the castle's most prominent feature, is one of the best preserved in England or France. Situated on the River Medway and Watling Street, Rochester served as a strategically important royal castle. During the late medieval period it helped protect England's south-east coast from invasion. The first castle at Rochester was founded in the aftermath of the Norman Conquest. It was given to Bishop Odo, probably by his half-brother William the Conqueror. During the Rebellion of 1088 over the succession to the English throne, Odo supported Robert Curthose, the Conqueror's eldest son, against William Rufus. It was during this conflict that the castle first saw military action; the city and castle were besieged after Odo made Rochester a headquarters for the rebellion. After the garrison capitulated, this first castle was abandoned. Rochester was besieged for the third time in 1264 during the Second Barons' War (1264-1267). The castle's royal constable, Roger de Leybourne, held Rochester in support of Henry III. Rebel armies led by Simon de Montfort and Gilbert de Clare entered the city and set about trying to capture the castle. Again the castle's defenders resisted, though this time with a different outcome. After a week, the rebel armies raised the siege in the face of relief from Henry himself. Although the garrison did not surrender, the castle suffered extensive damage that was not repaired until the following century. The castle saw military action for the last time in 1381 when it was captured and ransacked during the Peasants' Revolt. As Rochester Castle fell out of use its materials were reused elsewhere and custodianship relinquished by the Crown. The castle and its grounds were opened to the public in the 1870s as a park. At various points during the 19th and 20th centuries repairs were carried out. The castle is protected as a Grade I listed building and Scheduled Monument. Today the ruins are in the guardianship of English Heritage and open to the public.

How To Get To Rochester Castle (Map):