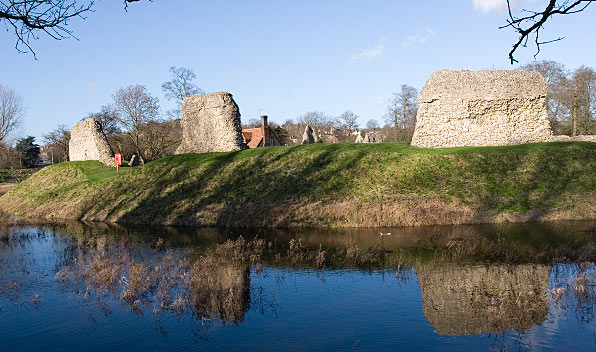 Location: Berkhamsted, Hampshire, England.
Built: 11-13th century.
Condition: Fragmentary remains.
Ownership / Access: English Heritage.
Opening Times: Check their website for more info.
Price of Admission: Check their website for more info.
Notes: Berkhamsted Castle is a Norman motte-and-bailey castle in Berkhamsted, Hertfordshire. The castle was built to obtain control of a key route between London and the Midlands during the Norman conquest of England in the 11th century. Robert of Mortain, William the Conqueror's half brother, was probably responsible for managing its construction, after which he became the castle's owner. The castle was surrounded by protective earthworks and a deer park for hunting. The castle became a new administrative centre, and the former Anglo-Saxon settlement of Berkhamsted reorganised around it. Subsequent kings granted the castle to their chancellors. The castle was substantially expanded in the mid-12th century, probably by Thomas Becket. The castle was besieged in 1216 during the civil war between King John and rebellious barons, who were supported by France. It was successfully captured after Prince Louis, the future Louis VIII, attacked it with siege engines for twenty days, forcing the garrison to surrender. After being retaken by royal forces the subsequent year, it was given to Richard, Earl of Cornwall, beginning a long association with the Earldom of Cornwall and the later duchy. Richard redeveloped the castle as a palatial residence, and made it the centre of the earldom's administration. Edward III further developed the castle in the 14th century and gave it to his son, Edward, the Black Prince, who expanded the hunting grounds. The castle was also used to hold royal prisoners, including John II of France and rival claimants to the English throne. In the late 15th century, the castle became increasingly unfashionable and was fell into decline. By the mid-16th century, it was in ruins and unsuitable for royal use. Stone was taken from the castle to build houses and other buildings in the town. The castle was almost destroyed during the construction of the London and Birmingham Railway in the 1830s. As a result, it became the first building in Britain to receive statutory protection from Parliament. In 1930, the castle passed from the Duchy of Cornwall to the government's control. It is maintained as a tourist attraction by English Heritage.

How To Get To Berkhamsted Castle (Map):