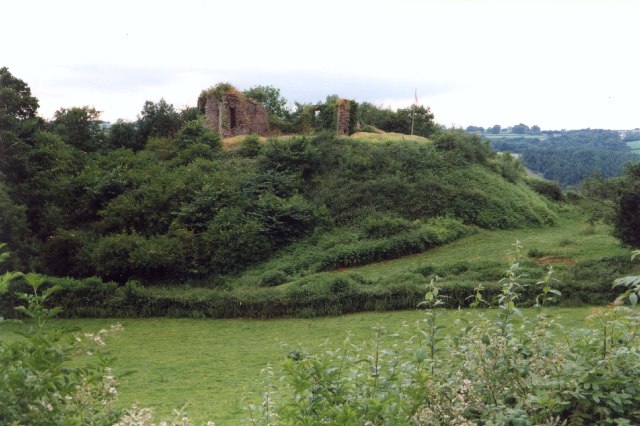 Location: Wye Valley, Herefordshire, England.
Built: 11th-13th century.
Condition: Fragments.
Ownership / Access: Private.
Notes: Clifford Castle is a castle in the village of Clifford which lies four miles to the north of Hay-on-Wye in the Wye Valley in Herefordshire, England (grid reference SO243457). It was the caput of the feudal barony of Clifford. The early motte and bailey castle was built on a cliff overlooking a ford on the River Wye in 1070 by William FitzOsbern, 1st Earl of Hereford. The castle was intended to provide protection for a planned Norman settlement above the River Wye of quite a substantial size, with c. 200 plots being intended, running uphill for half a mile towards Llanfair, where the church was sited on the hilltop. St Mary's church remains today, much altered in the Victorian era. It has a wooden 13th century effigy of what appears to be a clerical figure. It has been said to resemble another effigy, of Bishop Peter of Aigueblanche, in Hereford Cathedral. A short distance downhill from Llanfair is Priory Farm, built on the site of a Cluniac Priory, believed to have been founded in 1130. Priory Farm is a very substantial farm building and presumably used much of the stone already on the site in its construction. It is also surrounded by stone wall field boundaries. In the Domesday Survey the settlement was recorded as Cliford. Maps from three centuries later show Herefordshire having three significant settlements; Hereford, Wigmore and Clifford. The position of the castle adjacent to the River Wye enabled the seasonal flooding of the river to fill the flood plain around the castle, forming a shallow lake or marsh with the assistance of a dam on the western or upstream side of the site.