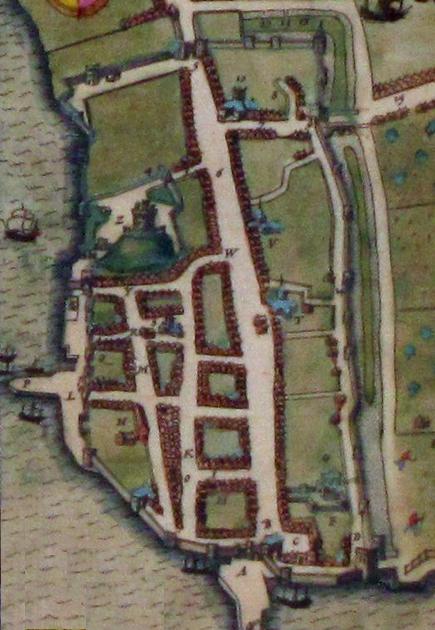 The castle portrayed by John Speed in a map of 1612 - John Speed - Wikipedia - lic. under Public Domain

Location: Southampton, Hampshire, England.
Built: 11th-14th century.
Condition: Fragments.
Ownership / Access: Accessible open space.
Notes: Southampton Castle was located in the town of Southampton in Hampshire, England. Constructed after the Norman conquest of England, it was located in the north-west corner of the town overlooking the River Test, initially as a wooden motte and bailey design. By the late 12th century the royal castle had been largely converted to stone, playing an important part in the wine trade conducted through the Southampton docks. By the end of the 13th century the castle was in decline, but the threat of French raids in the 1370s led Richard II to undertake extensive rebuilding. The result was a powerfully defended castle, one of the first in England to be equipped with cannon. The castle declined again in the 16th century and was sold off to property speculators in 1618. After being used for various purposes, including the construction of a Gothic mansion in the early 19th century, the site was flattened and largely redeveloped. Only a few elements of the castle still remain visible in Southampton.Only fragments of the medieval castle survive today, with most of the original site covered by modern buildings and dominated by the block of flats built in 1962 over the remaining part of the castle motte. The castle hall and the castle vaults can still be seen, along with surviving parts of the south bailey wall, the Castle Watergate and fragments of the north wall.A sequence of archaeological investigations between 1973 and 1983 excavated around 10% of the total castle area, and more limited work has occurred since, including a "watching brief" excavation carried out in Forest View road in 2001.