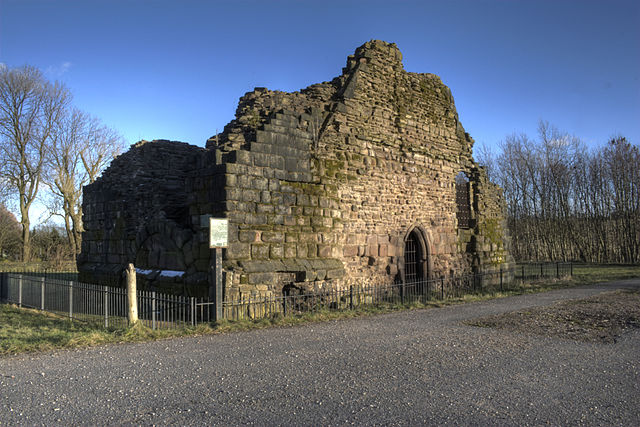 Location: Radcliffe, Greater Manchester, England.
Built: 1403.
Condition: Fragment.
Ownership / Access: Local authority. Castle open to the public.
Notes: Radcliffe Tower is the only surviving part of a manor house in Radcliffe, Greater Manchester (grid reference SD79580751). It is a Grade I listed building and a Scheduled Monument. The house was rebuilt in 1403 by James de Radcliffe, who was lord of the manor of Radcliffe, and consisted of a stone-built hall and one or two towers, probably built with ashlar blocks. De Radcliffe was given a royal licence to fortify the site including adding crenellations and battlements. The manor house was demolished in the 19th century leaving only the tower. The tower measures 10.5 yards (9.6 m) by 19 yards (17 m) and survives to about 20 feet (6.1 m) in height. The remains are owned by Bury council. It was used as a pig sty before being restored. Radcliffe Tower is about 3.3 kilometres (2.1 mi) south of Bury Castle, a late 15th-century moated manor house. In 2009, plans to restore the shell of the tower as part of a wider restoration project covering Radcliffe E'es, Close Park and the parish church were launched with the support of Bury Council.

How To Get To Radcliffe Tower (Map):