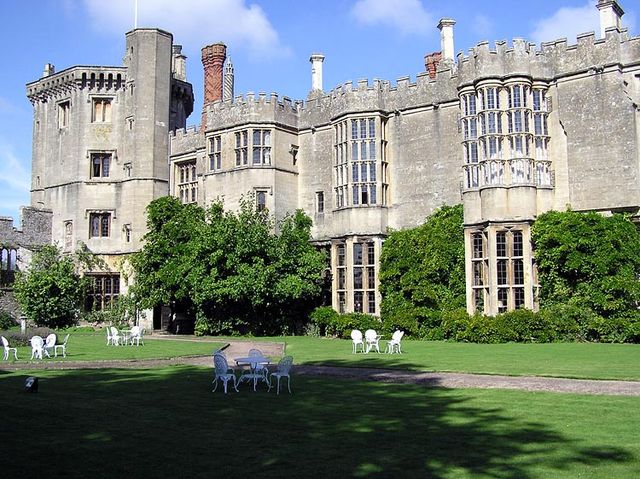 Location: Thornbury, South Gloucestershire, England.
Built: c. 1511.
Condition: Substantially intact.
Ownership / Access: Hotel.
Opening Times: Check their website for more info.
Price of Admission: Not free. Check their website for more info.
Notes: Thornbury Castle is a castle in Thornbury, South Gloucestershire, England. It was begun in 1511 as a home for Edward Stafford, 3rd Duke of Buckingham. It is not a true castle (designed to serve as a fortress), but rather an early example of a Tudor country house, with minimal defensive attributes. It is now a grade I listed building. The site was occupied by a manor house in 930. Part of the original plans for a very grand residence were "well advanced" before the duke was beheaded, in 1521, on the orders of his distant cousin Henry VIII, for alleged treason. As in the King's palace at Sheen, the main ranges of Thornbury framed courts, of which the symmetrical entrance range, with central gatehouse and octagonal corner towers, still stands, as do two less regular side ranges with many irregular projecting features and towers. Following the Duke's death Thornbury was confiscated by King Henry VIII of England, who stayed at the castle for ten days in August 1535 with his queen, Anne Boleyn.Following the English Civil War, the castle fell into disrepair, but was renovated in 1824 by the Howard family. It is situated behind St Mary's Church, a church whose founding dates from the Norman period. Between 1966 and 1986 the castle was operated as one of the UK's top restaurants by Kenneth Bell[disambiguation needed] MBE with staff including food writer Nigel Slater and MasterChef New Zealand judge Simon Gault early in their culinary careers. The castle is now a 26-room luxury hotel and restaurant, and a venue for weddings.

How To Get To Thornbury Castle (Map):